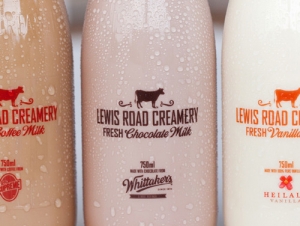 The chocolate milk is part of a range of flavours.

Lewis Road Creamery's Fresh Chocolate Milk has been selected to go head-to-head with the most ground-breaking food products from around the globe.

The Kiwi product will compete at the World Tour by SIAL Awards.

Launched in 2014, the chocolate milk was chosen by a panel of international judges as the country winner for New Zealand and is now put forward into the global final where it will compete for the Supreme Award against 27 other country winners.

The World Tour by SIAL Awards judging panel, made up of food editors from 28 countries, gathered in Paris in early April to assess 84 food products from around the world, grouped by different consumer trends.

According to Tania Walters, the only New Zealand judge at the Awards, the product was chosen because of its originality and the 'match made in heaven' combination of two premium products.

"The judges all agreed that Lewis Road's originality lies in the collaboration between two existing products, each made from the very best NZ ingredients," says Walters.

"Launched into a stagnant category with a very small marketing budget that caused an unpredictable response, this flavoured milk continues to shine as a great example of cross-pollination between two trusted premium brands."

Peter Cullinane, founder of Lewis Road Creamery, says he is honoured their chocolate milk is representing New Zealand on the world stage.

"We are absolutely thrilled to be recognised in this way at such a prestigious event," he says.

"Our mission has always been, and always will be, to produce world-class dairy products right here in New Zealand and this recognition proves that we are indeed delivering on that promise."

Held every two years, the World Tour by SIAL Awards are the largest of their kind and are part of the SIAL Paris Exhibition which showcases the most ground-breaking food industry products from around the globe.

The World Tour by SIAL Supreme Award winner will be announced at the SIAL Paris Exhibition which takes place from October 16 - 20 in Paris.

NZ butter booming in the US

Boutique dairy, Lewis Road Creamery, says sales of its premium butter in the US have skyrocketed during the COVID-19 pandemic.

Boutique dairy producer Lewis Road Creamery has eliminated 210 tonnes of fresh plastic from its packaging cycle over the last year.