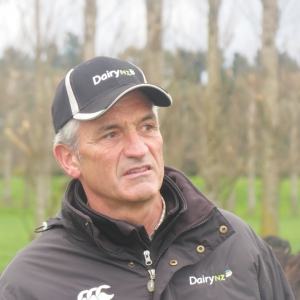 "The main concern was the length of time the conditions have been in this state in Wairarapa, back to October when the spring was cold and dry; then quite quickly in November it developed as very hot and windy," O'Donnell says.

"Rainfall has been patchy so we have a situation in South Wairarapa and the north eastern coastal areas where the moisture deficits are sitting at 120mm to 130mm. That's getting into really severe conditions considering 150 is permanent wilting."

O'Donnell says data from two NIWA sites in the region has been given to MPI. The drought committee will meet again this week, update the data and pass it to MPI.

"Farmers are feeding out their winter feed and they don't have any pasture cover. The concern is that unless we get significant rain – say 50mm plus as a minimum – in March we're going to head into winter without any pasture cover and depleted winter feed supplies. It's serious."

He says if conditions deteriorate much more the committee will consider asking the Minister for Primary Industries to declare a medium scale drought. But while this will bring help from Rural Support Trust, banks, IRD, etc it won't solve the real problem – lack of feed.

"Wairarapa evenings and mornings are now getting a lot cooler, with heavy dews. So it won't take long for the temperature to drop and potentially disaster will be heading our way for winter."

Meanwhile DairyNZ Wairarapa consulting officer Leo Hendricks says dairy production has fallen 10% in the past few weeks and farmers have sent their cull cows to the works. And there may be a shortage of run-offs for young stock in winter.

"Most run-offs are not irrigated so they look brown. Once-a-day milking is being used a fair bit and generally there is not a lot of room to move; farmers are starting to dry off lighter and early-calving cows to take pressure off the [herds] and off the feed supply. There is some feed around; you can still buy PKE and there's a bit of baleage around but it's getting more expensive. It's a matter of trying to bridge the gap until it rains, but the rain keeps on being delayed."

Don’t slog on, dry off now

DairyNZ is advising drought-stricken farmers to dry off early rather than continue milking with bought-in feed.