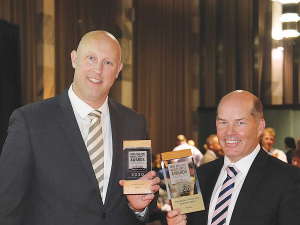 The company scooped both the industry award and the supreme award in the competition for its Te Ara Miraka programme, which boosted biosecurity awareness and culture change with its farmer suppliers.

Close to 200 people attended the awards ceremony held in Parliament’s banquet hall and hosted by the Minister of Agriculture Damien O’Connor.

The awards are designed to recognise organisations, volunteers, businesses, iwi, hapū and tamariki around the country who are contributing to biosecurity. In the case of Miraka it was Te Ara Miraka, their excellence programme which incentivises farmers by way of an increase in their annual milk pay-out to improve a whole range of practices on their farms. These include environmental, milk quality, food safety, animal welfare, health and safety and biosecurity.

Both the industry award and the supreme award recognised the fact that Miraka identified that biosecurity was missing from the programme and set about working with external parties to develop a special training course. Each farmer was trained in biosecurity risk assessment, risk mitigation and how to create and implement a biosecurity plan within their business.

It was a special night for Miraka milk supply manager, Grant Jackson who is responsible for the Te Ara Miraka programme.

He says the programme has been operating for about five years and says they are starting to see some significant behavioural changes back on farm, which benefits the individual businesses, the industry and the community.

Jackson says like any project of this nature there are always the early adopters and they bring along the others over time.

Miraka dairy paid out on average $7.14/kgMS to its farmer suppliers last season.