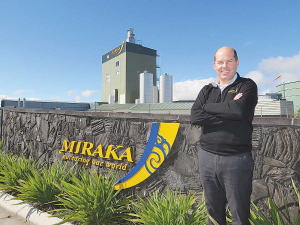 Miraka chief executive Richard Wyeth says last season’s payout is slightly behind where they would have liked it to have been.

Miraka dairy paid out on average $7.14/kgMS to its farmer suppliers last season.

The payout includes payments under the Te Ara Miraka scheme that allows farmers to earn up to 20c/kgMS more for improving their milk quality and meeting strict environmental and management standards.

Miraka chief executive Richard Wyeth told Dairy News that the payout is slightly behind where they would have liked it to have been, but points out that Covid-19 had quite an impact on the second part of the year.

He says the March lockdown impacted its UHT business.

“As far as the new season is concerned there is a certain irony in that the outlook is really positive due to the fact that China, where 100% of our UHT goes, is one of the only countries in growth.

“We have seen the demand really go through the roof since they have got through Covid and our two key customers have actually asked us for more UHT.

“We are currently running at capacity and so we are stretching the plant at the moment.

“There was certainly a short-term blip last season, but for this current season the demand is very strong for UHT,” he says.

Wyeth says a positive for Miraka during Covid has been that the Chinese authorities have been encouraging their people to drink more milk. He says it’s interesting that when Covid first hit, people were saying don’t focus on China.

“Three months later the same people were saying, aren’t we lucky we have China,” he says.

Wyeth says Miraka has always been prudent and canvassed several markets from a risk management perspective. He says long term they are working with their partners in a bid to get more certainty from those partnerships to help de-risk their business.

“We have a refreshed strategy and are in the middle of executing that at the moment. This is going well for this season but at the end of season we will review that and see what if any changes we need to make.”

Richard Wyeth says their farmer suppliers are relatively happy and understand that last year was a challenging year with Covid-19.

He says the payout range for this season is $5.75 to $6.75 with the midpoint at $6.25, which he acknowledges is down on last season. He says this price reflects the disruption, nervousness and uncertainty created by Covid and what the next 12 months might look like.

“The dollar has come off and then strengthened quite quickly, then come off again, and just that uncertainty as to where the dollar is going to land and where prices are going has made for a slightly more pessimistic view than last year. But overall, the signals we are seeing at the moment are positive,” he says.

Wyeth says Miraka has launched its frozen milk concentrate this year, designed for the Asian market. He says that is a major focus of its growth strategy.

“The frozen milk concentrate is made by taking the concentrates out of the evaporator and freezing it and shipping into the market, where they defrost it and use it as a milk product. The product is packed in a 20 litre bag and box,” he says.

With solid demand for its UHT products, business for Miraka has been good. Wyeth says its milk powder business is solid and there is steady demand for this. Down on the farm, things are also looking good with the milk flows up 4% on last year.

Wyeth says its farmers are now starting to see the benefits of the Te Ara Miraka scheme, which incentivises them to focus on good environmental production systems. He says as a result of this scheme, its farmers are in a good position to deal with the new regulations.

“A lot of our farmers have already got farm environment plans in place, they have got GRIS maps of all their land, so they are long way down the path already to be compliant, which is pretty fantastic,” he says.