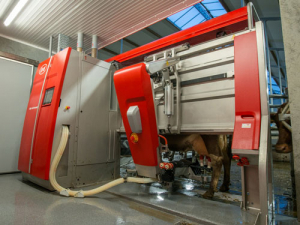 Lely’s new milking robot – the Astronaut A5 – will be available in NZ very soon.

The company last week launched the Astronaut A5 at its head office in Maassluis, the Netherlands, after 18 months of onfarm trials in five European countries, the US and Canada, involving over two million milkings.

Lely vice president sales, Gijs Scholman, says the plan is to have the robots in NZ “very soon”.

He says the A5 will be “somewhat higher priced” than its predecessor the Astronaut A4; Lely’s 180 independent Lely Centre owners determine the final selling price to farmers.

“Our Lely Centre operators actually market and sell machines; they will decide the final price to the farmer; we cannot interfere in that,” says Scholman.

“It is a fact that the Astronaut A5 has much extra functionality and reliability plus a much lower operating cost.”

The A5 has a new hybrid milking arm that is silent, faster, more energy efficient and more accurate, Lely says.

Post-milking teat spraying has been improved by pre-scanning the udder before spraying, ensuring optimal udder hygiene and limiting the risk of contamination.

A redesigned, intuitive user interface makes automatic milking easy to understand for everybody.

Lely, which celebrated it 70th birthday last week, unveiled its first Astronaut A1 robot 25 years ago.

“In our vision, the fully robotic farm runs fulltime, 24 hours a day. Whether feeding, milking, cleaning or caring for animals, automation takes away repetitive work for the farmer, enabling him to focus on individual cows that really need his attention.”