NZ butter lands in the US 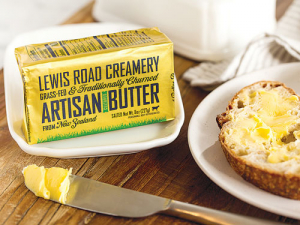 The US states Texas and California are being targeted by Lewis Road Creamery for its specialty butter.

Its founder and chief executive Peter Cullinane says the decision to sell butter in the US started about six months ago when they worked with Southern Pastures, a company with many dairy farms in the South Island and the biggest single supplier to Westland Milk Products (WMP).

Cullinane says working with Southern Pastures and WMP immediately gave Lewis Road a source of quality milk and production ideally suited to producing high quality branded butter for China and the US.

“The big opportunity in the States is for grass fed butter.

“We take the idea of grass-fed butter for granted but in the US they don’t; its valued by discerning consumers who want products from animals that are grass fed and they are prepared to pay a premium for this,” he says.

The two markets in the US that Lewis Road is targeting are hubs for Air New Zealand – Houston and Los Angeles. Cullinane says they are putting their product into high-end Texas supermarkets in Houston, Dallas and Austin.

In Los Angeles they have done a deal with another high-end supermarket chain called Erewon.

When his general manager was in the US, he identified Erewon as the perfect supermarket for them to sell their butter to.

He found out that the owners of the supermarket chain lived next door to the NZ counsul-general in Los Angeles, Maurice Williamson the former politician.

“A friend of mine asked Maurice Williamson if there was any chance of us meeting the owners of Erewon and the next day I was sitting down with them in Maurice’s office and a deal was done. In my view Maurice Williamson is doing a great job,” he says.

Cullinane says the first shipment of butter is small in volume by commodity standards but he says they just want to start developing the market in the same way as they did in NZ – starting small and gradually building sales.

Cullinane is impressed with the Irish, with their grass fed Kerrygold brand, having developed a stronghold in the market.

“They are now number-two in the market in the US and as far as I am concerned anything the Irish can do we can do better,” he says.

The Irish have focused on developing a strong brand whereas NZ has remained focused on commodities. Cullinane says in the US market NZ hasn’t really got its heads around added value and especially the value of products produced from grass fed animals.

“This attribute is completely under-appreciated in NZ,” he says.

Cullinane says NZ must get away from feeding PKE to cows and produce high quality milk by cows fed only grass.

Peter Cullinane has strong West Coast connections and the arrangement with WMP fits well with that, as does the way WMP makes his butter.

He says they use the Fritz system as opposed to the Amix system used by most companies.

“When I was a young lad I had a two-and-sixpenny postage stamp with a large kauri butter churn on it. The Fritz system is the modern day version of what it was like 100 years ago so there is an added charm to our butter being produced in an artisan-like way,” he says.

The founder of boutique milk company Lewis Road Creamery is leaving the business.