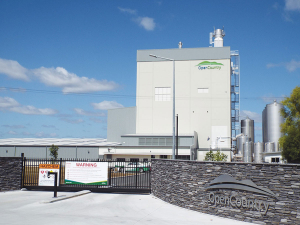 OCD will open the doors of its new Horotiu plant to suppliers on March 7.

OCD chairman Laurie Margrain told Dairy News that the plant has been operating at full capacity since August.

“On March 7 we will have an opportunity for our suppliers to see and have a look around the plant – their first opportunity to see where their milk gets processed.”

It is majority-owned by the Motueka agribusiness Talleys, the owners of meat company Affco. OCD’s new Horotiu plant is next to Affco’s meat processing plant and headquarters.

Chief executive Steve Koekemoer said in the company’s January newsletter to milk suppliers that the new plant opening is a “big milestone”. He also cited as highlights the new division Open Country Brands and the launch of an organic programme.

“We also launched our 12-month rolling milk price forecast with 4 settlement periods payment system and our new annual fixed milk price scheme,” he told suppliers. “These have all been to ensure our competitiveness and to add value to the business.

“Most of these initiatives are still in their infancy but as we evolve as a business we will expect all our stakeholders to benefit from these changes and we will continue to innovate.”

The new OCD plant at Horotiu is next to a major freight hub being built by Ports of Auckland to transfer goods by rail to its port.

Last year OCD was announced as the first major freight customer of the Waikato freight hub.

Koekemoer noted the huge advantage of having their warehouse located between NZ’s two dominant ports -- Auckland and Tauranga.

“Strategically the new Waikato hub will allow us to continue our export growth while lowering our costs and environmental footprint through greater use of rail,” said Koekemoer.

It had two stands, one of them developing sales channels for its branded AwaRua Organics products

“The Middle East is an important export region for us and has become strategic over the years as we’ve diversified our product mix and markets,” he said.