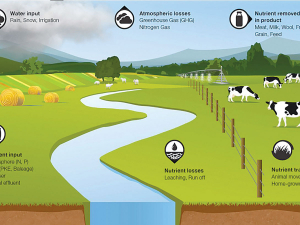 Overseer says its science models are driven by decades of dedicated research into New Zealand farming and conditions but is it fit for purpose?

That's the view of Adjunct Professor in Industrial Mathematics and a long-time critic of Overseer, Graeme Wake.

However, he concedes the soil science treated as components of the system is very likely solid science and up to date.

But this is not all the expertise required here.

"My modelling colleagues and other internationally recognised experts in the science of systems are very concerned from a system perspective," Wake told Dairy News.

"While I am not a specialist in the particulars of soil science, my colleagues and I are able to recognise when the components of an interacting system have been incorrectly combined, and how serious errors result from using the naïve methods Overseer has," he says.

Their expertise is in taking the knowledge of other scientists working on the system components and linking this knowledge to provide predictions of system outcomes and underpinning decisions.

He says this requires advanced mathematics to calculate correctly, and without this, the Overseer designers have fallen into adopting a naïve approach that has led them into serious errors.

Wake says the owners of Overseer have claimed it's been peer reviewed.

But the recent Ministry for Primary Industries (MPI) report says that the review was not done by people versed in systems science. Yet, he says NZ is quite well-endowed with experts in this field.

"Overseer is definitely not suitable as a regulatory tool, which is what the science panel that has just reviewed the tool have said.

"Overseer is an overly simplistic approach that does not incorporate temporal 'cause and outcome' effects and system interactions," he says.

Wake says Overseer relies on averages, and in a dynamical system evolving in time, the mean or average can be a very poor statistic to use.

"In Overseer the key science is not woven together as proper science would dictate," he says.

Wake says if he was asked by government what to do in light of the science review panel report, he would say start again; get a competent team to develop an algorithm that meets the needs of NZ and find or develop a software package that would work.

Also have it peer reviewed and patented if necessary. But he says the key to all of this is having the right people with the right qualifications doing this work.