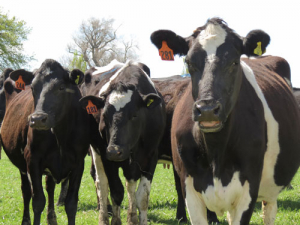 Big dairy processors lifting payout forecasts for 2015-16 is a further sign of a rebound.

The big dairy processors in New Zealand are lifting payout forecasts for 2015-16 in a further sign of a rebound in global milk prices.

Canterbury processor Synlait has followed Fonterra and lifted its forecast to $6/kgMS – up $1 on its previous forecast. The company had planned to update its forecast in early February 2017 but says now is better for its 200 suppliers.

Chairman Graeme Milne says it has kept a close eye on the global dairy market and cannot ignore the trending increase in dairy prices.

“Production is also reducing here in NZ, but Europe has a much greater impact on overall dairy prices and we’ve seen this in action with dairy prices over the past three months.

“China’s demand for dairy products is another key driver for global dairy prices. While their demand has risen recently, it’s unclear if and for how long it might continue.”

Fonterra last month raised its forecast price by 75c to $6/kgMS; combined with the forecast earnings per share range for the 2017 financial year of 50-60 cents, the total payout available to farmers in the current season is forecast to be $6.50-$6.60 before retentions.

“We’ve seen falling production in the major exporting regions, particularly Europe and Australia, and an unprecedented decline in NZ milk supply due to wetter-than-normal spring conditions in most regions. On balance, demand continues to be firm, so there has been a steady improvement in global dairy commodity prices and this is reflected in the improved forecast.”

NZ’s second-biggest dairy co-op Westland Milk Products has also raised its forecast and will pay its suppliers $5.50-$5.90/kgMS; net return to shareholders (after retained earnings) will be $5.30-$5.70/kgMS.

“Firstly, global dairy market prices have increased and Westland has taken advantage of that.

“Secondly, we have improved production efficiency and quality assurance, resulting in savings that can be passed to shareholders.”

Brendish says the global dairy market remains volatile and industry commentators are not agreed on where final payout figures are likely to settle.

“The improvements in the market give us sufficient confidence to be cautiously optimistic and raise our payout prediction.”

Westland is also raising its advance payout to shareholders to $4/kgMS, a lift of 20c.