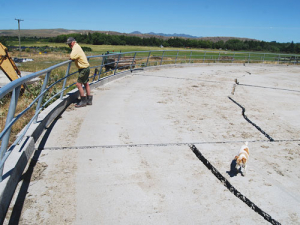 A web of large cracks have opened up on the entrance pad to Don Galletly’s quake-damaged rotary milking shed on his Waiau farm.

Don Galletly's Loch Ness dairy farm on the Emu Plain, near Waiau, remains the only one in North Canterbury unable to milk since the November 14 quake.

While farms either side were back up and operating within a few days, Galletly’s rotary shed is deemed a write-off.

“Three-quarters of the season is down the drain for us,” he told Rural News.

Loch Ness lies on the north bank of the Waiau river, opposite the Waiau and Rotheram townships. The farm covers 500ha, about 300ha as the milking platform and the rest is wintering runoff.

Some dry stock remain on the runoff, but the milking herd of just under 1000 animals has been moved to other farms. With little prospect of income, Galletly has had to let his staff go. While some might get casual work on the farm, he was helping some find other positions.

The shed and adjacent concrete pad are riddled with large cracks and the rotary platform lies about 30cm off-centre. Steel fences set in the concrete look fine at first but on closer inspection are bent and twisted, as is the steel roof.

“We’re working through the insurance but it looks as though it will be a rebuild.”

An upcoming geotechnical inspection may yet determine that the new shed will have to be built on firmer ground.

“But they’re pretty positive that they’ll get a shed up for me before next season,” says Galletly.

The farm’s effluent ponds are also damaged, one left out of shape because the shingle base shifted and collapsed towards the centre, under the plastic lining.

Galletly says working through the quake damage has been a long process. His first priority was making sure all the staff living on the farm were safe, then the cows. By lunchtime on the first day his bank manager, farm adviser and vet had arrived and helped get the milking stock away to other farms, mostly in the Culverden area.

Next were the stock water systems for the remaining dry stock, followed by fencing.

“Then we’ve been worrying about irrigation for the past fortnight. We’ve basically got it running again.”

Galletly is now getting no income from the cows moved off-farm, but he’s happy to know they’re being milked and mated – the farm was about half way through AI when the quake hit – and he’s looking forward to getting them back when the time comes.

“They’ve taken them to make sure those cows get milked and looked after. They need to be milked; it’s pretty hard on them if they aren’t milked – mastitis and all sorts of things,” he told Rural News.

“It’s pretty good of those jokers to take them on a few hours notice.”

Galletly says he must be positive and look at the silver lining.

“Hopefully we’ll get a better shed, a better system, and we’ll re-jig our business a bit – sit down and analyse it and see where we might improve.

“Within a couple of years we might be up and running, better than where we were.” Galletly is hoping to sell hay and silage for a small income stream while waiting for the shed to be replaced.