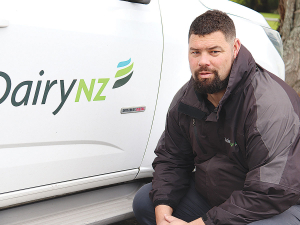 It's bad but it's not terrible.

That's how Mark Laurence, DairyNZ's lower North Island leader, is describing the wet weather which has plagued dairy farmers in western regions of the country.

The wet and cooler weather in western regions is said to be a key reason why overall milk production across the country for August was down by just over 4%. But Laurence says while conditions are not good, the weather is not as bad as it was in the 2017-18 season.

He says the wet is right across the lower North Island, but says that Taranaki may be over the worst of it, while the Manawatu is still suffering.

"We have all been through years that are lot worse than this one. What's different about this year is that we have had three really good winters and springs in a row and we're having to remember what a wet spring looks like," he says.

Laurence says the word on milk production from farmers he's spoken to is that it's pretty static but this has been generated by brought in feed. He says for many August was not too bad but as balance day arrived everything was at tipping point.

"The expected warmth that would normally kick in hasn't happened. Essentially it's about a lack of sunshine," he says.

This lack of sun has meant that while covers in some cases may look reasonable, the quality of the grass is poor.

Laurence says this has resulted in farmers putting cows into paddocks where they thought there was "x amount" of feed, however the grass was not producing the level of nutrition that might have been expected.

"My feeling is that a week of sunshine would see the place explode," he says.

But in the meantime farmers are feeding supplements out for two reasons, says Laurence - they want to retain milk production, but they are also conscious of the need to keep cows in good condition for mating which has already started in some areas.

"The two go hand in hand. By maintaining the milk production farmers are also making sure that the cows are cycling and the results of a good mating will become apparent in the following year and will finally have an impact on the farm in about a years' time," he says.

The wet weather is not only affecting pasture quality.

Laurence says there is barely enough grass available to feed the cows and not enough to generate silage which would not normally be cut at around this time of the year. The wet has also delayed crop sowing, which means they may be late and potentially lower yielding. He adds that wet ground has made it difficult to get machines onto the land to sow and harvest crops.

"Normally I would have expected cropping work to begin in early October, but with the delay because of the rain the whole season is being compressed.

"There is good advice out there to say you are now three or four weeks late then maybe you need a different variety of whatever crop, be it turnips or maize or something else, but there is only so much of that around. It's all about a balancing act," he says.

At a recent DairyNZ discussion at Otaki in the Horowhenua, the small gathering of farmers all highlighted concerns about the lack of good quality staff for being available for the sector.

Some talked about it being one of the slowest starts to a season they have seen in a long time but all had kept their production up and their cows in good condition. There was also talk about the challenges of complying with the new environmental reforms.

This is backed up by DairyNZ lower North Island leader Mark Laurence who says he's noticing a decrease in cow numbers with some farmers either selling their farms or reverting back to running beef. The challenge of carrying on and dealing with the compliance issues is simply too hard for some farmers.

On top of this Laurence says dairy farmers are starting to see rapid price hikes for some of their key consumables on farm.

"Feed, fertiliser and the cost of labour are going up. Everything is affected by inflation, including fuel and power, and people are working out how to cope with this phenomenon. But staffing is a big issue for farmers and I know of people who are traditionally good operators now having trouble getting staff," he says.

Laurence says farmers are just hanging in there at the moment. The main reason is the good payout. But he says if there was to be a substantial drop in this there could be real problems.

Dairy farmers want the Government to work more closely with the sector.

DairyNZ says the sector is committed to playing its part to reduce global methane levels by 30% by 2030.