Robot to give kids’ thumbs a rest 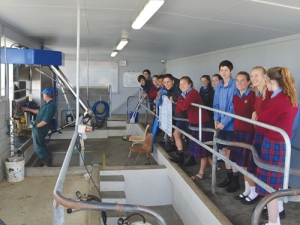 The DeLaval robot started milking the school farm's 52 cows two months ago and is being hailed as the latest tool to lure the 'PlayStation generation' into dairying.

The school's board of trustees chairman Geoff Walker says the robot is generating strong interest among students and the farming community.

"With robotics, students get to do their PlayStation bit as well as dealing with animals in fresh air; many see this as a career path," he told Dairy News. "I am in no doubt this will attract more young people to the dairy industry."

Walker says the robot leaves students with "eyes wide open". "They never thought this would come to our school."

Feilding High is no stranger to farming: the school set up its own farms in 1921 at the request of local farmers keen to send their children to learn agriculture.

Manawanui is an 81ha sheep and cattle farm on flat-steep hill country on the outskirts of Feilding; Ngakaunui is a 16ha dairy farm adjacent to the school on Churcher St and houses the robotic milker.

Walker says the farms were set up with the help of local councils and Ministry of Education. However, the Government ceased funding the farm several years ago, leaving the board of trustees to shoulder the burden.

"We pre-date Massey University; we were the agricultural education centre for this part of the country back in 1921. A boarding hostel allowed farmers in remote areas to send their children here to get educated."

With the robotic milker the school board has come full circle, he adds. And with centenary celebrations coming up in 2021 Walker says the board wants the facility to be "as relevant to secondary agri-education as we were back then".

Going hi-tech ties in with the school's new agriculture curriculum to be launched next year, designed with Saint Paul's College, Hamilton.

"Our hostel manager is getting enquiries from farming families, so there is a lot of interest being generated. Dairy is not perceived as a sexy industry to be in for the PlayStation generation but the robotic milking system is changing that."

Walker says the DeLaval voluntary milking system (VMS) has boosted the school's robotics department, and 12 faculties will benefit from its work.

"For the accounting class, rather than sitting in a classroom and doing accounts for a dairy farm they can walk down there and see first-hand what they are accounting for."

The board spent $700,000 upgrading the dairy farm and installing the robot; DeLaval sold the unit at a discounted price and provided extras such as the online cell counter free of charge.

The idea of installing a robotic milker at the school was initially discussed 18 months ago by one of the school's rugby coaches and a DeLaval staffer who attended Feilding High.

Walker admits the robotic milking concept was new to them; a presentation by DeLaval to the school board and management convinced them to go ahead.

He says the school is treating the robotic milking unit as a partnership with DeLaval. The company will run training for students at its Hamilton office and provide technical support to the farm. In return the school allows DeLaval
to bring prospective clients to see the robot operating.

The facility will be opened early next year to coincide with the Central District Field Days.

Feilding High School farm manager Mike Goodson says the robotic milker has been a learning curve for him as well.

He has managed the school farms for nearly six years, working with four students each day.

Goodson told Dairy News the robotic milker is a novelty for the students. "It has been bit of a learning curve for me as well, moving from an 8-a-side herringbone to this."

"It's a whole new ballgame; hands off the cow and hands on grazing management and computer. This system generates a lot of information and this helps manage the animals and farm better."

Frugal use of money

Feilding High School says it could do with more financial support from the Government and the industry.

Chairman Geoff Walker says recent investment on the dairy farm resulted from the school board's prudent and frugal use of money.

Last season the farm's 52 milking cows produced 400kgMS each; profits were ploughed back into the farm.

"We are putting any profits from the dairy unit straight back into it; we could do a huge amount if funding was there."

The school has a "grotty old tractor without a passenger seat" to teach kids how to drive tractors.

Walker visualises a tractor distributor leasing or lending a new model to the school to teach students.

He says companies supplying robots to the industry have noticed a shortage of qualified people to work alongside robots.

Workers on farms with robotic milkers need good skills in technology including computers, electronics and hydraulics. Many people learn on the job but this takes time, Hardy says.

However, Feilding High students coming through the robotic farm will be qualified from the word go.

The annual Central District Field Days has been cancelled due to Covid.