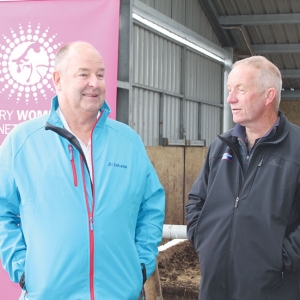 Robotic milking is coming of age in New Zealand and interest has surged in the last six months, DeLaval’s Grant Vickers says.

“I think it’s because a number of installations in New Zealand are working well,” he told Dairy News. “The perception of risk has probably lessened.”

The current inquiries, for robotics and barns, are from all sizes of farms and will result in installations in the North and South Island.

Vickers spoke about robotic milking during a Dairy Women’s Network field trip to a 600-cow wintering barn as part of the organisation’s ‘Entering Tomorrow’s World’ conference.

He gave a number of reasons why increased production should result from robotic milking, particularly with a barn. In New Zealand, dairy genetics gave cows the potential to produce more with access to good feed 24 hours a day.

On grass, when you have cows outside coming in voluntarily to get milked the typical scenario is having the farm divided into three blocks with a change every eight hours, enabling cows to be milked three times a day.

Production increase on a grass basis is based on more milkings, Vickers says. While hard numbers on longevity are not available yet,  he is “absolutely confident” they will get extra lactation out of some cows by robotic milking.

“That firstly comes from taking the stress off cows. The change in the cows’ behaviour and habit when you put them on voluntary milking is unbelievable. You need to see it to believe it.

“The same cow within two or three weeks would move from a herd mentality – you can almost see them smiling. They come into the shed and they haven’t been pushed by a backing gate or a motorbike… they’re not walking along the race with their heads down.”

On the matter of ‘future proofing’, Vickers says many older farmers are disillusioned because their kids have left the farm and don’t want to come back to milking. “[But that changes if you] tell them they can come home and be farmers but they don’t have to put the cups on twice a day.

“Some of them are saying they would come home. They are tech savvy these people, they like the idea of it.” He says he is talking to a number of people bringing their son or daughter into the discussion because they will come home with robotic milking.

Also a lot of older people on older smaller farms could replace the shed with robotic milking for “not a lot more” and stay on the farm for another 10 years.