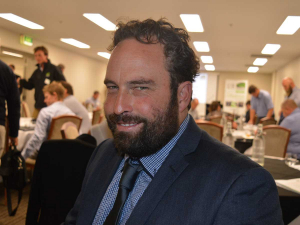 Sharemilkers have been facing the full brunt of banks as agricultural lenders try to contain or even reduce their exposure to the sector.

Outgoing Federated Farmers sharemilkers section chairman Richard McIntyre says in the last eighteen months there was a shift in the attitude of banks towards sharemilkers.

Some banks tightened lending requirements, others looking to remove them completely from their books.

“Many sharemilkers have been left stressed and bewildered at the speed of this change,” he says.

“Over the last year we have spent time working with banks to understand their position and find a constructive way forward.

“This has resulted in several workshops on financial literacy and understanding what banks are looking for in an agri customer.”

McIntyre stepped down this month after four years as chairman. He has been replaced by Dannevirke sharemilker Aaron Passey at the Feds sharemilkers section annual meeting. McIntyre will become the new dairy section vice chairman.

Farmers have been facing pressure from banks to reduce their loans. The Federated Farmers May 2020 Banking Survey of nearly 1400 farmers found that the number feeling ‘satisfied’ or ‘very satisfied’ with their bank lifted slightly from 68% to 69% in the past six months, and those feeling ‘under pressure’ dropped from 23% to 19%.

McIntyre says the Farm Debt Mediation Bill, which comes into force this week (July 1st), will provide a constructive way for many sharemilkers to deal with the increased pressure that they have been receiving from their banks.

Sharemilkers were worried that the cost of mediation would prohibit struggling farmers from engaging in the process.

Following a Federated Farmers submission to the parliamentary select committee, the cost to the farmer of the mediation (excluding their preparation and associated costs) has been limited to $2,000.

“It is compulsory for banks to offer mediation prior to enforcement action, however Farmers can request mediation at any time and the bank cannot refuse without good reason,” says McIntyre.

“The key to the success of this will be sharemilkers recognising the value of mediation and therefore requesting it at a time that is early enough to provide the best outcome.”

McIntyre says sharemilking still remains an attractive option for those who want to be their own boss in the industry. Sharemilkers can choose their own staff, own herds and make decisions around animal breeding.

However, he says the dairy industry is evolving and sharemilkers must continue to evolve.

McIntyre says the Feds sharemilkers section is in safe hands with Passey as chairman.

“There is still a lot to be done….the Zero Carbon Bill and the National Policy Statement (NPS) on Freshwater will change many farm systems and the terms of many sharemilking agreements will need to be renegotiated in order for them to remain viable.

“This will be a challenge, particularly in areas where the change required dramatically affects the farms profitability and therefore the farm owner’s ability to absorb the increased cost.”

Staffing issues remain a worry on farms, but Covid-19 has presented the sector an opportunity to improve its talent pool.

“There will be many displaced workers who aspire to enter a new industry and work their way up to a point of business ownership.

“For them to choose the dairy industry will require a clear and successfully functioning progression pathway…..that’s us – from contract milking to variable order sharemilking right up to herd owning sharemilking.”

Kuriger was convicted and fined by Palmerston North District Court for the ill-treatment of cows on a farm at Hukanui​, Wairarapa.

McIntyre says there are now questions around animal welfare obligations in a sharemilking relationship.

“It was determined that if the condition of the cow races is causing lameness and the farm owner is not prepared to fix them, then it is up to the sharemilker to repair them and attempt to recover the cost from the farm owner.

“If the farm owner has already refused to repair them, it is unlikely this will be an easy or fast process.

“Given the considerable amount of money involved, there would be very few sharemilkers with the ability to cashflow such an undertaking.

“This places an even greater obligation on the sharemilker in terms of due diligence and considerably increases the level of risk that they take on.”

Federated Farmers sharemilkers’ section chairman Richard McIntyre says not knowing whether the country or parts of it will still be in lockdown on Gypsy Day is adding to uncertainty in the industry.

Don’t shut borrower out of mediation

A cost of $6000 for mediation between an indebted farmer and a bank would be at the lower end of the cost spectrum, says Federated Farmers sharemilkers chairman Richard McIntyre.