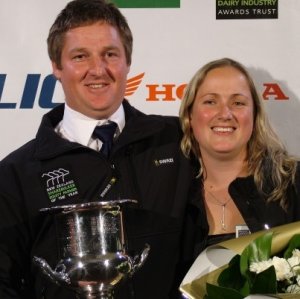 The big winners at the 2012 Southland Dairy Industry Awards are newcomers to the province, who share common interests and business strengths.

Both the Roskams and du Plessis' came to Southland to further their dairy farming careers, and say their teamwork is a key to their farm business success.

Originally from the Waikato, Billy and Sharn Roskam are 50% sharemilking 910 cows for John, Yvonne and Richard Evans. They won $17,400 in cash and prizes.

The couple, both aged 30, has a goal to fully own their herd in a year's time and to strengthen their financial position for future opportunities. "Our ultimate goal is farm ownership so our kids have a place to call home for many years to come.

"We love being part of the dairy industry, especially the ability to grow our business while growing our family," the Roskams say.

Second place in the Southland Sharemilker/Equity Farmer of the Year contest went to Winton 50% sharemilkers Toni and Vicki Miles. They won $12,650 in cash and prizes. Wyndham 50% sharemilkers Yuri and Michelle Faria placed third, winning $5850 in prizes.

The 2012 Southland Farm Managers of the Year, Hannes and Lyzanne du Plessis, were attracted to the region by relatives, 2010 New Zealand Sharemilkers of the Year and awards convenors Stefan and Annalize du Plessis. They won $12,000 in cash and prizes.

The couple came to New Zealand from South Africa in 2003, originally farming in the Waikato, before moving to Southland and the 650-cow contract milking position for Edendale Pastoral last year.

The du Plessis' goals are to increase their equity, develop relationships with industry leaders, be 50% sharemilking or in an equity partnership by 2015 and achieve farm ownership by 2020.

The runner-up in the farm manager contest was Awarua farm manager Kieran Sullivan, aged 25, who won $7100 in prizes. Winton contract milkers Andres Patino and Jorgelina Leiva placed third and won about $5000 in prizes.

After entering last year's awards he met his current employers, Martin and Kim Axtens, and took an assistant position with them on a 920-cow Winton farm owned by Roger and Rosemary Hamilton.

Ankerson, aged 23 years, won $7800 in cash and prizes and has the goal of farm ownership.

The contest's runner-up was Waianiwa farm assistant Nick Templer, who won $1320 in prizes. A colleague of Ankerson's, William Mehrtens, placed third in the contest winning $815. Mehrtens is a herd manager on the same farm.