Student in battle against stink bug 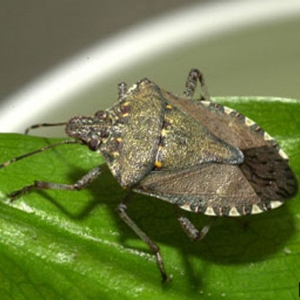 In the wake of the Queensland fruit fly threat Lincoln University PhD student Laura Nixon is working hard to develop a weapon in the fight to stop the introduction of another unwanted destructive pest, the brown marmorated stink bug.

The bug is currently regarded by New Zealand's horticulture industry as one of the top six pests of concern.

With funding from multi-organisational research collaboration Better Border Security (B3), Nixon's is carrying her research at the Bio-Protection Research Centre on Lincoln's Te Waihora campus.

She is trying to come up with a way to chemically detect an infestation of the bugs in a confined space such as a shipping container; one of the ways experts believe the insect could enter the country.

The brown marmorated stink bug is an agricultural pest found in Asia, having already invaded the United States it is considered highly likely it could successfully establish in New Zealand if it gets here.

Since the insect arrived in the United States in the mid-1990s, it has occasionally multiplied into plague proportions. In 2010, it caused US$37 million damage to apple crops across several states.

It feeds on more than 300 hosts, primarily fruit trees and woody ornamentals but also field crops. Almost any crop can be at risk.

Nixon says scientist have identified the chemical compound, or the stink, the bugs emit when disturbed but she will work on trying to distinguish it from other naturally emitted odours.

Initially she will work with native stink bugs, which are not considered pests, and then travel to the United States to see if her results work on the pest species, which are closely related.

Nixon says the bugs tend to live in big groups or aggregations, so if one container gets through then there could be a problem.

She hopes her work will stop any potential invasions at the border.

She says the method could be used to detect other insects such as ants and harlequin ladybirds, also considered pests, though they present other challenges as they give of lower odour levels.

Her role involves developing the chemistry to the stage the odour can be detected and others may undertake the commercial application.