Taking farmers together on climate change 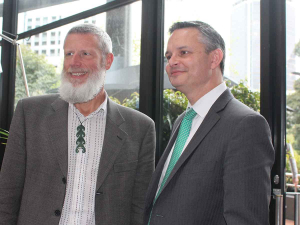 How we take the farming community with us and what trajectory we are on for climate change response is all open for discussion, says Dr Rod Carr, the new chair-designate of the Climate Change Commission.

But the fact that we need to deal with climate change is real and urgent, he says.

“New Zealand and New Zealanders have signed up to an international agreement to play our part and make our contribution to the impact and effects of climate change,” Carr told Dairy News directly after his appointment was announced.

“We cannot achieve that goal without making sure we do everything to reduce biogenic emissions.”

Asked by mainstream media about alternative proteins, he said there is no doubt there would be new technologies producing protein - whether animal or plant protein.

“And no doubt there will be new production formats in which carbohydrates and proteins are produced for the world.

“But remember that the world’s population is forecast to grow by two billion hungry mouths in the next couple of decades. So we need all of what we can produce and we need to produce it with a much smaller carbon footprint on the planet.”

Climate Change Minister James Shaw announced Dr Carr’s appointment last week. Pending the outcome of the select committee and parliamentary process, the Climate Change Commission will be set up by the passing of the Zero Carbon Bill.

Shaw says the first priority is to set up a commission that has credibility and is well connected and engaged and can pick up the work which the interim climate change committee has already done. It will develop the advice for the first three- to five-yearly carbon budgets.

All the above is conditional on the Zero Carbon Bill being passed which is “anticipated but not assumed,” Shaw says.

Carr’s appointment is a chair designate role. The climate change committee will continue in the interim with its work under Dr David Prentice.

Carr says he will assume a shadowing role in that period, and subject to the legislation getting Royal Assent, the commission can begin its work without a slowdown in transition.

Shaw says Carr has an incredible array of intellectual, academic and professional experience.

“I am particularly attracted to the background he has in areas relevant to the challenges of adapting to the effects of climate change. He led Canterbury University through the post-earthquake recovery period.  He has a PhD in insurance and risk management which is highly relevant to the area. He also chaired the infrastructure board for five years. Much of the challenge will be in the placement of infrastructure so that it is resilient to the impacts of climate change in the future.”

Carr also served as deputy governor and chair of the Reserve Bank.

Emissions reduction by farming will not be nearly as significant as the changes farming has been through in the past, says Climate Change Minister James Shaw.

Asked by Dairy News about farmer discontent, Shaw said there is a huge array of opinion on this in the agricultural sector and between farmers.

“We tend to hear voices at one end of the spectrum more loudly than the other end,” he said.

“But the fact is there are people who are anxious about their livelihoods and incomes and so on and that is understandable because we are talking about a period of change here.

“So I think it is incumbent upon the Government to make sure people understand that it is not nearly as significant as the changes farming has been through in the past.

“In the future, farms and farming will be as valuable and as different as today’s farms are from 30 years ago.”