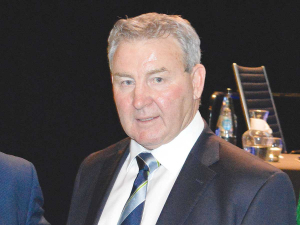 Outgoing Fonterra chairman John Monaghan says the highlight of the 2019-20 results for him is the $1.3 billion turnaround in profitability.

Monaghan took over as chairman in July 2018, right in the middle of Fonterra’s financial struggles and just months before the departure of then-chief executive Theo Spierings.

After two years of financial losses, Fonterra this month announced a $659 million annual profit, turning around a $605m loss the previous year.

Regarded as a safe pair of hands, Monaghan –backed by a management team led by chief executive Miles Hurrell – steered the co-op back to profitability.

In an interview with Dairy News, Monaghan said those were trying times for the co-op.

“You never feel good about making losses, but we needed to get on and start making non-regret decisions.”

Monaghan says making key changes in personnel was very important for Fonterra as it got backon the road to recovery.

He had also come under fire from some shareholders for the two straight years of losses. Monaghan says he had to “block out the noises”.

“We had a long list of things to do, including bringing about a cultural change.”

Monaghan says the return to profitability is very pleasing. The highlight of the results for him is the $1.3 billion turnaround in profitability. Also right up there is the $7.14/kgMS milk payout for last season, despite Covid-19.

Monaghan says farmer shareholders should get their heads up and be proud of the co-op’s achievements.

“I’m proud of what our farmers are achieving, their community involvement and what they are doing around the environment.”

Fonterra also announced a 5c dividend for last year, after no dividend was paid out in 2018/19.

“This year marks a return to paying dividends, a position we expect to maintain in the future, assuming normal operating conditions.”

Monaghan says the $11 billion returned to the economy by the co-op shows its importance to the country.

Fonterra chairman John Monaghan says he will remain a proud shareholder even after stepping down from the board.

“I have always been proud of the co-op, long before my governance roles,” he says.

“I will remain a proud shareholder even from the back paddocks.”

Monaghan served as Fonterra Shareholders Council chairman before being elected to the Fonterra board in 2008.

He will retire as chairman this year at the co-operative’s annual meeting on November 5.