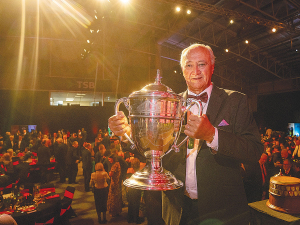 Minister of Agriculture Damien O’Connor announced this at the Ahuwhenua awards dinner in New Plymouth attended by 800 people, including Ministers Willie Jackson, and Meka Whaitiri along with the Māori King, other dignitaries, politicians, agribusiness leaders and whānau from all the finalists.

As O’Connor presented the chairman of the Trust, Paki Nikora, with the trophy, there were scenes of great jubilation as whānau came on stage to join in the celebrations which included waiata and a haka. Tataiwhetu runs 432 kiwi cross cows and carries 188 replacement stock on their two support blocks. They milk once a day and their herd produces 129,140 kgMS.

The other finalists were Pouarua Farms, which runs 4,600 cows run on nine separate farms located near the township of Ngatea on the Hauraki Plains and Tunapahore B2A Incorporation, a 385 cow operation located at Torere on State Highway 35 on the East Coast of the North Island.

Paki Nikora told Dairy News the Trust was elated at winning the trophy and never thought they would reach such heights in the agricultural sector. He says Māori tend to belittle themselves all the time, but when push came to shove the Trust decided to give it a go and enter the competition.

He says they have received so much support from various members of the Ahuwhenua Trust, ministers of the crown and the wider dairy industry.

“For us the biggest drive now is diversification and we to starting to look and see what that might be in the future. As far at Tuhoe is concerned we are trying to lift the whole image of our iwi into another space and winning this award is a launching pad for this initiative. All the help that is coming through from government has helped elevate us to new levels when we can achieve those sorts of things.

“I think it’s going to be huge moving into the future generally for Māori right across the board,” he says. Nikora says as chairman of the Trust he sees himself as a dartboard that everyone throws stones at when things go wrong. He noted that if you get things right no one remembers you, but if you get it wrong you get the boot. While Nikora was born on a dairy farm, most of his working life was spent in business away from the farm. But he expects his fellow trustees to not only make decisions as trustees but also to get their hands dirty and work on the farm. He has been chairman of the trust since 2009 and in that time has initiated many changes which have led to improvements to the farm.

In 2010 the Trust received the Ballance Farm Environment Award for the creation of special places on the farm including the protection and enhancement of wetlands, landscape features and historical places. A year later in collaboration with Tūhoe Pūtaiao the Trust received the Green Ribbon Award for protecting biodiversity. In 2015 the Tataiwhetu Trust transitioned from convention milking to organic and is now fully certified by AsureQuality. In 2019 it received the Fonterra Organic certificate.

Kingi Smiler, chairman of the Ahuwhenua Trophy Management Committee, congratulated Tataiwhetu and all of the finalists, saying the standard of competition this year was particularly high and the judges had their work cut out to come up with a winner.

He says the field days run by all the finalists were extremely good and showed the quality and depth of Māori dairy farming enterprises. He says each finalist excelled and all are great role models for farmers.