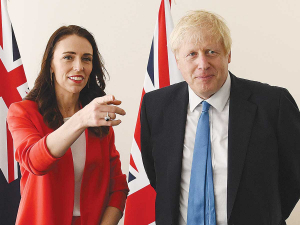 Prime Minister Jacinda Ardern would be hoping for a good trade deal from Boris Johnson’s Government.

At 11pm on Friday January 31 Britain officially cut ties with the EU after a much fraught 46-year membership of what was known at various stages as the ‘European Common Market’ or the EEC.

He says while the uncertainty of whether Britain would actually leave the EU has been resolved, and to some extent we know what direction we are going in, there remains the challenge of dealing with the detail of future trading relationships with the EU and UK and how this will be achieved.

“We have still got the unfortunate situation with our quota split in terms of our access to Europe and the UK and that applies to a number of products out of NZ of which dairy is a big one,” he told Dairy News.

The split in access to the UK and EU is unfortunate because it does not recognise the commercial realities. In particular where do products enter the EU as opposed to where they might finally be consumed? So, for us that’s work in progress,” he says.

As a member of the EU, it was effectively an open market for exporters such as NZ for more than 40 years and there were no tariff barriers. He says NZ’s position is that this situation should not change with Britain leaving the EU.

“If we can work through an FTA between the UK and NZ it would be a really worthwhile opportunity for us. Ironically it’s like turning the clock back to the days before Britain wasn’t in the EU and NZ enjoyed significant trade access there,” he says.

Bailey says negotiating a good FTA with Britain is important for them and NZ. He says he’s delighted to hear that Britain has got NZ on the priority list for countries to negotiate an FTA with.

Meanwhile talks between NZ and EU negotiators are continuing as the two sides work towards finalising an FTA. While the timetable for settling a deal seems to have slipped back, Bailey says he’s not worried about this.

“The FTA isn’t off the rails and yes it might take a bit longer but we believe the Europeans are serious and want to conclude this.

“We have to remind ourselves that NZ is one of just six countries in the world that doesn’t have some sort of trade agreement with the EU and that should be rectified and they know that and we are hopeful a deal will be struck,” he says.

Bailey expects the negotiations to get tough especially on some major agricultural issues and in particular dairy. At the top of the list in this regard are what’s known as ‘geographic indications’. This is where the name of a given product has the same name as a town or region - for example Gouda cheese.

He says from NZ’s point of view if the EU got its wicked way on this issue it could affect our cheese exports.

“Yes they want to protect some of these geographical names they use in other parts of the world but at the same time it looks like they are overreaching it. For example Havarti cheese has been in the systems as a generic name within codex for some time but now it seems they want to turn the clock back and claim that name and we are very unhappy about that,” he says.

So with issues like this still to be worked through, Bailey is expecting what he describes as ‘robust negotiations’.