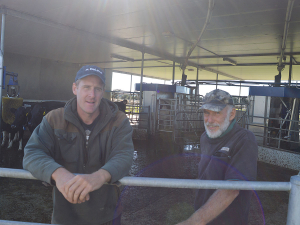 Heritage Farm in Karaka milks 165 cows year-round with two new V300 robots, supplying 66,000kgMS annually to Fonterra. The V300 robot was launched globally about a year ago, with key upgrades on the earlier version.

Heritage Farm is run by owners David and Cathy Yates and their son Brian. The farm has been in their family for 108 years and was the original Yates seed farm in New Zealand before switching to sheep and beef. In 1977 the farm was converted to dairy and David built a 28-bail Fletcher Sulzberger rotary shed, then considered to be ahead of its time.

By 2009, this rotary had passed its use-by date. In 2010, the Yates’ were the first to install DeLaval robotic milking machines in New Zealand.

David recalls that robotic milking wasn’t common back then; only a handful of farms in the South Island were milking with robots.

David became interested after a few visits to the DairyNZ Greenfield research farm, Ruakura; set up to investigate the use of robotic milking machines on NZ farms.

He says the cows took a while to adapt to robots on the 135ha farm but once trained, they were happy.

Brian, who returned to the farm around the time robots were installed, says changing from rotary to robotic milking was tough, especially on older cows.

Last year, the family heard about DeLaval launching the new V300 robots and decided to give them a go.

Brian says the major improvements he has seen are a higher teat spray rate and a higher cup attachment rate, resulting in fewer ‘incompletes’- cows leaving the shed having not been milked out completely.

“The accuracy of cup attachment and teat spray means we save a minute here and there. They all add up during the day and there’s more milking time and capacity,” he told Dairy News.

He says teat spray usage on the farm has also dropped.

“With the teat spray now right under the udders, a good pulse of spray does the job and we don’t have spray blowing away when there’s a strong breeze.”

The VMS V300 is geared toward farmers working in markets with labour uncertainties and shortages, as well as ever more rigorous animal welfare and food safety requirements.

DeLaval says the VMS V300 has a 99% teat spray hit rate, 10% higher capacity meaning more milkings per station, up to 50% faster attachment time, and lower running costs. The system has a 99.8% attachment rate and capacity to milk more than 3,500kg/day/robot, meaning even less farmer interaction required in the dairy.

The system comes with DeLaval InControl, a new user interface allowing access to information and control of the system remotely. DeLaval PureFlow, is a new transparent teat preparation cup, these enhancements provide even better stimulation to increase milk flows, and DeLaval InSight which provides the latest vision technology for a smooth, fast and accurate attachment.

“This is a level of performance increase which we just haven’t seen before” says Justin Thompson, DeLaval’s Vice President of Oceania.

“The level of data that can be retrieved for each teat via the individual quarter milking and then automated to ensure complete milking every time is remarkable. The release of the VMS V300 really sets the bar high for robotic milking systems.”

The system has been extensively tested on farms in Europe and is also highly adaptable to New Zealand’s grass based system, DeLaval says.

Getting our act together on organics

The Government's Organic Bill has passed its first reading and public consultation has begun.