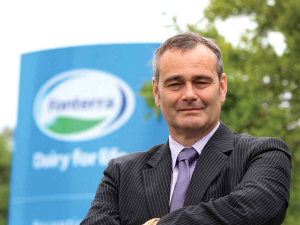 The needs for animal protein in discussions on future nutritious and sustainable food systems seems to be missing from much of the rhetoric, says Jeremy Hill, Fonterra’s chief scientist and technology officer.

That includes the EAT-Lancet report, says Hill, who spoke at the Climate Change and Business Conference in Auckland last week.

Hill said he was speaking in his role as a professor of sustainable food systems at the Reddit Institute.

(The EAT-Lancet Commission on Food, Planet, Health reported on its international study on feeding a future population of 10 billion people a healthy diet within the planet’s boundaries. It made recommendations for a daily diet which was plant based but included some dairy and meat. It has been the ‘go to’ report this year in global discussions on sustainable food systems.)

Hill told the conference that all consumers had the absolute right to choose their diets.

“But to the best of our ability we must make sure that is as informed a choice as possible,” he said.

“Ultimately it may be an emotional decision they make and again that is fine. But I want to ensure that we don’t get emotion -- such as on social media -- mixed up with facts.”

The food system is complex locally and globally with interconnections and interdependencies, Hill said.

The Reddit Institute has been trying to simplify this but “it is a devil of a thing to model but not over simplify to the point where you end up with results that really don’t provide a true reflection of reality”.

A key point is often missed out of discussion even in the EAT-Lancet report. Modelling in that report shows there is a big gap between current dairy production and future needs. That gap is similar to other food classes such as vegetables and legumes. Nut production is “way off” future needs but Hill says nuts “are very expensive and take a long time to produce”.

Hill also showed a graph from another study, the Global Burden of Disease report, which also showed a big shortfall in dairy and that is only based on a recommended 425mls a day.  “That’s not the three serves of dairy a day we have in some developed markets which is around 750 mls a day.”

Hill says the EAT-Lancet report took the right approach to how a future global food system could work to feed a healthy diet to the world’s population. But he disagrees with the way it analysed the data.

The report said milk production could be significantly reduced in the future. But Hill said analysis by the Reddit Institute and with the Global Burden of Disease showed that is in fact incorrect.

“Just how affordable, achievable and practical would it be? Nuts, legumes and the others -- the amount of production increase required would be staggering.  We are talking 10 fold, 20 fold, 30 fold from today’s levels.

“Unless we are very careful and unless there is a huge change in the way the food system works -- it is the world’s biggest industry -- the only way to drive that sort of change is to significantly increase the price of those food groups.”

Recommendations for change in the EAT-Lancet report were neglectful because it missed out a critical factor for transition, he said.

“We need to have a practical way of doing so.”

The report also said, for some reason, that animal systems could not improve productivity but the plant system could improve very significantly in order to close this gap, Hill said.

“I am not sure that is true and I will give you an example. Dairy might be 25% of New Zealand’s emissions but it is only 0.4% of world emissions and our emissions are a third of the global average.  It is much less than some of the production elsewhere in the world.”

Some technologies being developed could change the game on the sustainability credentials of milk, Hill said.

Those credentials for milk need to improve on a global basis, Hill said.

“I am saying that modelling, including EAT-Lancet, shows you can’t actually get the diets to work without [dairy] and lots more of it.

“That means in my business to put even more emphasis on the need to put effort into sustainability and solutions.

“We must find ways in which we uncouple feed consumed by ruminants [from] the methane produced. Technologies are being developed that have the potential to do that.  They could change the game.

“You [would] still have water issues but so do lots of agricultural systems. A lot of the crop based agriculture produces a lot of nitrates, for example. We will need to have a sustainable food system for 8.5 billion people by 2030, and as soon as 2030 you will have another 1.1b people or possibly 10b by 2050.

“Those people will require the bioavailable nutrients on a mass basis. You need to look at what qualifying scenarios in the food system can provide those and the consequences and how much we need to improve them all.”

Hill said we should not back away from improving the ecosystem “but ultimately there is a moral imperative to feed the world’s population”.