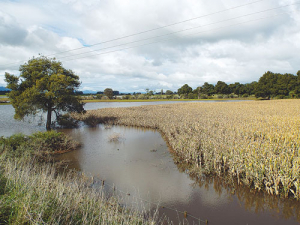 Floods in April and continuing rain are costing some Bay of Plenty farmers up to $700 per cow to repair damage and buy extra feed.

Their average herd being 370 cows, these farmers face an extra $260,000 in operating costs.

“The wet trying conditions are making life very difficult and I am still personally involved in flood recovery around the Whakatane Eastern Bay district. We are still dealing with issues from that and the farmers want to see some sunshine to help dry things out.

“A lot of supplement is being used because the ground is so wet and pasture growth rates are not where they need to be; farmers are mindful of the need to minimise pasture damage.”

Jensen says the higher payout is very welcome by farmers, especially those hit badly by the floods.

Despite the wet conditions calving is going pretty well but they are making a tough job tougher. He hears of vets having to do more assisted calvings than normal.

“I have spoken to a few farmers whose stock has come back from winter grazing not quite in the condition they wanted them to be in; they put this down to the hard conditions that have made life a bit more difficult for everyone.”

He says the farmers struggling the most are those in wet, low lying areas; those on the slightly elevated hill country are faring better.

In northern Waikato, pasture damage on some farms is as high as 80-90%, says Feds provincial president Andrew McGiven.

The ongoing rain is compounding the problem caused by the floods in April. It takes only 3mm of rain for the ground to be suddenly sodden again.

“I’ve never seen so many pugged paddocks. The guys with standoff facilities have been using them overtime -- I certainly have. We thought we were going to have a good autumn but it’s turned out a bit of a nightmare.”

McGiven says most dairy farmers, himself included, are using more supplement than normal and pasture utilisation has been poor. Some farmers have had to re-grass their pastures two-three times and other farms are so badly damaged they won’t support grazing for a year.

“Everyone is tired of the rain. We are all doing our best with what we have. We are well aware of the requirements under animal welfare rules and are trying to look after the stock which is where our money comes from and minimise the pugging.”

McGiven says most guys coping well have a plan in place to deal with their predicament; and they appreciate the help from the Rural Support Trust and Feds.