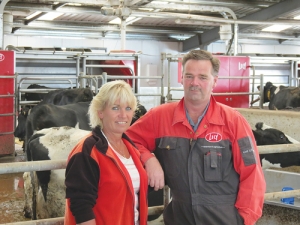 Wilma and Aad van Leeuwen are not happy with Fonterra’s winter milk premium.

Fonterra's one-off South Island winter milk offer of $1.40/kgMS has been slammed as “a complete insult to dairy farmers” by a long-time out-of-season supplier.

Aad van Leeuwen contacted Dairy News after reading the cautious support for the move in the May 12 issue of this paper.

“It’s a complete insult to dairy farmers in the region and a typical case of the co-op ripping off its own members,” he said. “You can’t produce winter milk for $1.40/kgMS… That’s less than half what they should be paying.”

Van Leeuwen has one year to run on a winter contract supplying Cadbury via Fonterra from a farm in North Otago. It was set up 6-7 years ago with “millions of dollars” invested in housing cows specifically to milk through winter.

“You can work out for yourself where the milk’s going to go if this is all Fonterra’s prepared to pay,” says van Leeuwen, who is in the process of negotiating winter supply terms with Oceania.

Other winter milk suppliers further south are similarly disappointed by Fonterra’s paltry offer, says van Leeuwen. “Their contracts have been pulled and they spent zillions setting up for winter milk.” Cartage charges mean there’s even less of the $1.40/kgMS premium left for them, he points out.

“I find it hard to believe anyone will be interested in supplying at $1.40/kgMS. You don’t just throw a switch to turn on winter production but I suppose if you’ve been caught without a contract $1.40 is a bit of help.”

Wintering costs in the southern half of the South Island mean the premium should be at least $4/kgMS, he says.

Many farms that don’t normally winter milk have already dried off and wintering costs nudging $40/week/cow in some parts of the south, and the low payout, mean more cows will be wintered on milking platforms with a longer dry period than normal, he adds.

Fonterra, which made the offer of $1.40/kgMS less cartage to Clandeboye, South Canterbury, to suppliers in Canterbury, Otago and Southland by e-mail in April for milk produced in June and first half July, said it was to take advantage of additional demand in Asia for mozzarella.

Earlier this month it said work on a new quick-frozen mozzarella plant at Clandeboye is complete, doubling capacity.