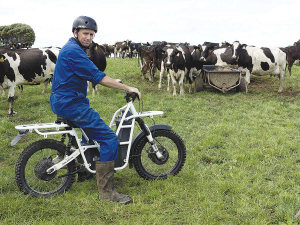 Kiwi eco-tech pioneer UBCO is hoping for increased sales of its utility electric bikes across New Zealand farms, thanks to funding from the government backed Carbn Group.

Carbn Group was established to accelerate low emissions investment in New Zealand. Its partnership with UBCO to provide asset finance for a new subscription service model might help fast-track UBCO chief executive Timothy Allan's vision to have an UBCO on every farm in New Zealand. The prospect represents a $1.4 billion per year opportunity for the global company.

Instead of buying an EV outright, UBCO's subscription model means users can pay a fixed monthly fee of around $300 per month covering the bike, battery and servicing while UBCO retains ownership and stewardship of the product.

"Subscription means low upfront costs, and it includes servicing and maintenance so there are no unplanned costs. It's basically a no hassle way of running a bike or a fleet of bikes.

"And the bikes are a more sustainable transport option, both durin guse and at the end of life," says Allan.

With an estimated 350,000 unregistered motorbikes and ATVs on New Zealand's rural properties, Allan says an UBCO on every farm in NZ would make a significant improvement to the carbon footprint, and subscription opens the opportunity for wider spread ownership.

One such farmer leading the sustainable farming transition is Grant Coombes, who has owned a fleet of UBCO 2X2s for the past five years.

Having started out as sharemilkers, Grant and his wife Kyly moved into ownership in 2002 and currently have interests in a number of properties in central and western Waikato. Having run numerous two-wheeled motorcycles and ATVs for many years, Coombes was aware of relatively high running costs, alongside health and safety issues with staff on the latter and the problem of storing and handling petrol on-farm.

Jumping in with both feet in 2015, he bought seven UBCO bikes in 2015 and quickly became a convert, praising their light weight, quietness and cool running, alongside the ease of riding and two-wheel drive via the individual wheel motors. Typically travelling around 20km each day, he calculates that running costs amount to around $1.50 a week each, with the machine charged every night and still running on their original batteries.

On the downside, Coombes finds that in some situatuions he would like a little more acceleration, the ride can be a little harsh and the load carrying capacity offered by an ATV could be useful at certain times.

Having recently signed up for four 2021 Work Bike models using the subscription service, Grant notes that the idea of a fixed cost of ownership appealed, with the maintenance costs, of which there have been very little over the last six years, passing to UBCO.

The agreement also ensures replacement machines if there is any extended breakdown and the end of life disposal or recycling cost falls to the supplier.

With the upcoming market year 2022 (MY22) only a few weeks away, John Deere has released details of changes to its 6R tractor range.