Film wrap on bales proving a winner on farm 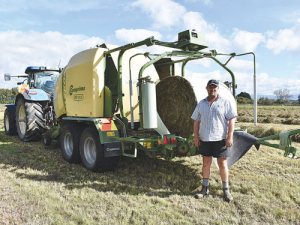 The latest Krone Comprima net wrap unit is proving its worth to Wairarapa dairy farmer Lewis Herrick by enabling him to use net-wrap or a net replacement film for the first time.

Lewis has been trialling the machine since the last baling season, tweaking the set-up of the unit to meet local conditions.

“We’ve tested in all kinds of weather, including the wind and the damp, and different crops,” he says.

“Of the 1500 bales I’ve wrapped this year I’ve used film on 500 and can see huge savings on baling time already.”

In a season dictating that feeding-out began in December, Lewis notes that film-wrapped bales are much easier to unwrap than conventional net-wrapped; the film doesn’t get caught in parts of the bale feeder as can happen with net.

Stored bales also appear to be in better condition with the film system, no doubt helped by being packed tightly, stopping air ingress and leading to less rodent or bird damage, which should all contribute to less spoilage over the longer term.  Lewis believes bales will be able to stay wrapped for a couple of years.

As well as big improvements in bale quality there are also useful cost savings by using only four layers of film rather than the usual six, because the film put on in the chamber offers more protection than net. When net is required, changeover from film to net and vice versa is a simple process.

John Tulloch, of Tulloch Farm Machines, said another test rig in Southland has been seen to reduce the effect of windy conditions when the wrap is being used; he also notes that less air gets into the bales, meaning that along with less spoilage the quality of silage will improve for farmers and contractors using it.”