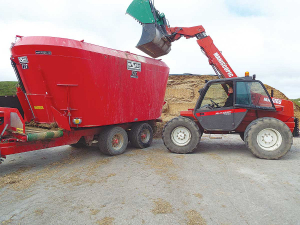 The arrival of the Hi-Spec mixer has allowed the farm to extend production.

Coolbreene Trust near Taupo is a large-scale dairy operation farming 1150ha, including run-off blocks, within a 10km radius of its home base.

While grass is the primary feed, summers with dry spells of up to sixty days, means the farm also grows 120ha of lucerne, up to 40ha of maize and 75ha of chicory.

During those summer months and the latter part of the milking season, supplementary feeding is used to keep condition on cows and prolong production, but Patrick was always conscious of animals selectively feeding the ration being presented.

This led to the arrival, in March, of a mixer wagon from Giltrap AgriZone, imported from County Carlow, Ireland manufacturer Hi-Spec. The T27 is a substantial unit measuring 7.6 metres long by 3.4m high. It has a capacity of 27 cubic metres and tips the scales with a tare weight of 8.66 tonnes

Its tapered tub, manufactured with a 20mm thick floor and 8mm thick sides, houses twin vertical mixing screws that mix and chop, utilising 12 tungsten blades mounted on each auger. The action of the screws moves the load vertically and horizontally in a figure of eight motion that ensures a homogenous mix that incorporates all the key ingredients and resists selective feeding.

The driveline uses a twin-speed heavy-duty reduction gearbox, sourced from Italian specialists Comer, while the running gear uses a tandem axle layout, featuring rear-wheel steering and 4-wheel hydraulic braking – the latter very important when the loaded machine might weigh in at close to 25 tonnes.

Patrick says they chose the machine based on its build quality, with a key consideration being the axle layout, opting for the rear-steer configuration to making manoeuvring in the yard easier.

“We also noticed that the tyre equipment was more readily available locally than some fitments being used on competitive machines.”

Keen to give animals a 1kg “top-up” as they stood around during milking, the operation currently produces one large mix per day, taking around 15 minutes to create, using ingredients such as silage bales, clamped maize silage, lime flour, magnesium sulphate and some water for palatability.

From an ease of use perspective, Patrick singles out the floating, anti-overflow ring at the top of the mixing tub that stops bales trying to “climb out” and the ease of use of the integral weigh system that takes away any guesswork when creating mixes.

In this case, the Digi-Star system features four load cells to offer accurate weight readings and allows the option of creating rations with up to 98 ingredients, 98 different mixes or any combination of both.

“The arrival of the Hi-Spec mixer has allowed us to extend our production through what is usually a very dry period for us, typically towards the end of the lactation,” says Patrick. Our records are showing us that the new regime of using a mixer has helped to deliver an extra 30kgMS per animal, during the March to May period, pushing our overall average up to around 545kgMS/cow. The combination of the mixer and some selective breeding should see us topping 600kgMS in the not too distant future.”

One of the more interesting first-time exhibitors at National Fieldays was Storti, from Verona, NE Italy, showing a self-propelled, self-loading mixer wagon. This large machine was catching the eye of large scale dairy farmers.