No fences? No problem 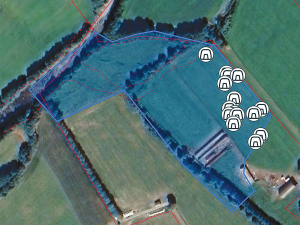 The grazier uses the No Fence app to draw virtual boundaries or 'breaks' within a paddock.

While New Zealand is regarded to be the home of No. 8 wire and electric fencing, it looks like the future of fencing might be virtual.

Already we have seen companies like Halter demonstrate the control of cows using vibrating collars and recently Gallagher bought Australian company Agersens, but it looks like the northern hemisphere is a little ahead of us.

First conceived in the 1990s by Norwegian Oscar Horde Berntsen, granted a patent in 2009, and trialled extensively between 2015 and 2020, the product has gone on to be used by 2,500 customers, who have fitted nearly 28,000 collars and monitored 74 million hours of pasture management.

Like the systems we see in NZ, the collar delivers an audible signal that trains the animal to recognise the virtual boundary. The grazier uses the No Fence app to draw virtual boundaries or 'breaks' within a paddock. If an animal starts to move towards that boundary, an audible cue gives a warning to the animal, getting increasingly loud as it gets nearer, encouraging the animal to move in the opposite direction.

If it chooses not to respond, a mild half-seceond duration electrical pulse, at about 18% of the kick of a traditional electric fence, is activated. When a pulse is activated, the user is sent a message with the animal's location. After three pulses, the animal is highlighted as a possible escapee, again with its position, so the user can investigate.

Said to offer better pasture utilisation and animal welfare with regards to feed consumption, the systems also offers the ability to exclude animals from sensitive areas like rivers or streams, waterlogged areas of a paddock following heavy rain events, or indeed, any areas of potential danger. As well as the grazing benefits, there are major time savings related to moving electric fences or maintaining existing permanent fence infrastructure.

The system is also suitable for rugged environments where the dangers and practicability of establishing permanent fencing situations make it expensive in relation to production.

The system comprises a collar/transponder fitted around the neck of each animal, weighing around 1,400g. This incorporates a 20Ah solar rechargable battery that is said to be good for around three months. The system uses a combination of GPS, Bluetooth and a three-axis motion snesor to allow preceise interpretation of the animal's position, movements and behavioural characteristics.

Virtual fences can be established over areas that measure up to 6.4km long by 6.4km wide, its boundary set by placing up to 39 virtual fenceposts around the perimeter. The manufacturer suggests that training animals to use the system takes around five days, initially inside a fully fenced conventional paddock, then gradually introducing a virtual back fence, then moving to a fully virtual area.