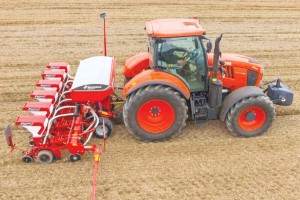 Kverneland has 25 years of electrical seed metering experience under its belt.

With 25 years experience of electrical seed metering, Kverneland claims it knows more about electric drive systems than any other precision seeding company.

Early designs appeared while the company developed the Unicorn Synchro Drive first seen in 1993; over the years this has evolved into the Kverneland e-drive II seen today.

During that process, other introductions have been section control and greater computing power, ultimately leading to the company’s Geoseed technology.

Geoseed is a patented control system that allows seeds to be placed either in parallel rows or alternately spaced between the rows. In the latter format, a diamond pattern is created, said to offer better uptake of nutrients, light and water.

When used with the company’s Geocontrol software, the precisely planted regime can also help reduce seed rates and eliminate overlaps that lead to densely planted areas.

Electric drive remains prominent in Kverneland’s precision seeder machines, used in the Optima and Monopill ranges aimed at maize and beet growers. Interestingly, this precision seeding is the means by which farmers and growers plant ‘amazing mazes’ to add to their income streams.

All KV precision seeders can work with the ISOBUS compatible iXtra LiFe front tanks and liquid fertiliser applications, and the company also offers two of its own universal ISOBUS terminals for use with its own or any other ISOBUS compatible machinery.