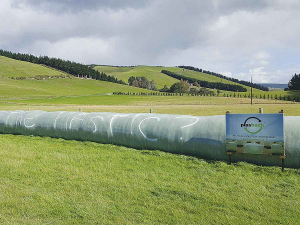 “Now that Associate Minister for the Environment Eugenie Sage has announced a consultation on a mandatory product stewardship scheme for farm plastics, the time has come for all plastic suppliers to the primary sector to consider their responsibilities,” he said.

Hartshorne wants all NZ plastic wrap distributors to get behind the Plasback scheme voluntarily, as any Government imposed requirements would likely be more costly.

Hartshorne cites a December 2018 Colmar Brunton ‘Better Futures’ report saying 72% of Kiwis are worried about the build-up of plastic in the environment. They are more concerned about plastic waste than about the cost of living and the protection of children, which were second and third in the poll.

“The agricultural industry must take note because the public’s attitude towards single-use plastics is yet another issue that can affect our reputation among consumers.” Started 14 years ago, the Plasback recycling scheme has nationwide collectors and depots collecting waste silage wrap and silage sheeting. Volumes have grown lots since the scheme began: in the 2018-2019 year 2400 tonnes of plastic were collected, and 1100 tonnes were recovered in the first two months of the current year.

Plasback collects all brands of silage wrap, with some suppliers getting a free ride by distributing plastic products but not contributing to an accredited product stewardship scheme, Hartshorne says.

“The ministry has signalled a change in its thinking towards mandatory product stewardship to stop free riders. Farmers are putting pressure on their contractors and asking what they are doing to help recycle the plastics they are putting on farm.”

“Every manufacturer and distributor has an obligation to contribute and they should get credit from contractors, farmers, the Government and the public for doing so.”

The Plasback scheme and the farm chemical container recycling programme Agrecovery have shown the need for these product stewardship schemes and farmers’ willingness to use them, Hartshorne says.

On-farm plastics recycler Plasback says its hard work over the last 15 years is now paying off.