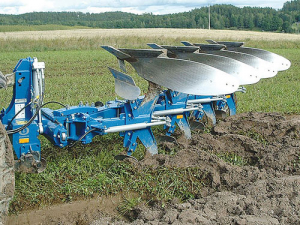 Overum is in the Kongskilde stable now owned by global player CNH.

Replacing the previous CX series that date back to 1995, the long overdue replacement come in fully mounted three-, four- and five-furrow configurations suitable for tractors up to 160hp.

The manufacturer, a plough maker since 1850, says its new modular steel design with fewer welded joints will make the ploughs 40% stronger than standard frames and contribute to reducing overall weight.

The CX2 series offers five manually adjusted furrow widths from 350 - 550mm and a choice of Overum bodies that include the standard XLD version, the slatted XSD or the low-draft XL body.

The ploughs are protected by shear bolts as standard, although an optional hydraulic auto-rest system is available.

On five furrow versions, the hydraulic system centres the plough prior to turnover, and this can be specified as an option on 3- and 4-furrow variants.

The turnover system can be configured to roll under or over depending on the individual situation.

The factory says rolling the plough ‘under’ reduces stress on the frame and turnover mechanism, while turning ‘over’ better suits operators ploughing with a furrow press.

Don’t get hooked up on paint

Anyone who has broken in a new plough will know the frustration of waiting until all the paint has come off.