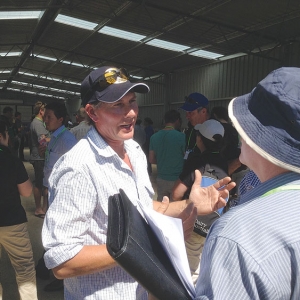 Two busloads of farmers descended on Lawrence’s farm in Osmaston, 50km west of Launceston, before the Australian Dairy Conference; part of the tour was a bus ride through the 487ha property.

Lawrence and his wife Jill own Fermer Dairy, milking 910 cows on a 236ha milking platform. They won the 2014 Dairy Environmental Award and were finalists in the 2014 Dairy Farmer of the Year Business award.

He says the farm is set up to produce 375,000-400,000kgMS/year; irrigation is key. About 90% of the milking area is now irrigated using farm storage and Meander Dam water.

The farm has three centre pivot irrigators. Trees lost to the pivots have been replaced by shelter belts he planted with assistance from Landcare Australia.

The herd is mostly Jersey. Lawrence aims to breed cows that are “easy-care” – 450kg in liveweight and producing their liveweight in MS.

Cows are fed mostly grass, topped up with about 1.2tonnes of grain and silage.

For Ken and Jill, young stock management is vital, and they make sure plenty of time and energy are allocated to calf rearing.

“Colostrum is fed to all calves the afternoon they are brought to the calf sheds,” he says. A new calf shed allows replacements to be housed separately from bobby calves.

“Calves are weaned from milk at about 80kg but continue to be fed with muesli for six to nine months to ensure target weights are reached.”

Lawrence was keen to emphasise that he wasn’t turning the farm into an organics operation. “But we’re minimising chemical use. We’ve done tissue tests and salt and chlorine levels are climbing; we’re compensating for that by minimising use.”

During the bus tour, farmers noticed a small flock of sheep. Lawrence had bought 300 last year to fatten. “If we are lucky, we will make a bit of money out of them,” he said.

Fermer Farm was bought by Ken Lawrence’s grandfather in the late 1930s; it ran as a mixed farm with cows, wool sheep, beef cows and cropping.

Lawrence’s father Lindsay took over in the late 1950s and continued the tradition.

After finishing agricultural studies, Lawrence returned to the farm in 1983. With the collapse of the wool market in the 1990s the farm was converted to dairying.

From Tasmanian farms to China

Tasmania will send fresh milk to China from early next year.

Tassie floods a heart-break for many

Hundreds of dairy cows were killed and farms across Tasmania severely damaged this month in the worst flooding many farmers have ever experienced.

Fancy a vodka? Ever thought of looking over the fence for your quaff?