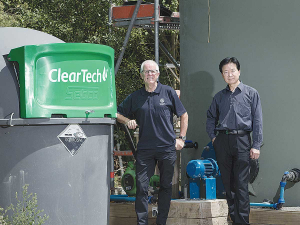 The saving equates to the average daily use of about 3,000 people, or the amount used by an individual in eight years.

With a potential to save billions of litres of freshwater annually if used across the New Zealand dairy industry, the systems efficacy and impact is confirmed by LUDF farm manager Peter Hancox.

“Our ClearTech plant has been operational from the start of our milking season and we’re saving at least 50% of the water used to wash the yard. If we continue along this trend, then over a 10-month season we’ll achieve a total saving of 6,000,000 litres of freshwater,” he says.

Hancox notes the costs of set-up and ongoing maintenance are relatively modest, and far outweighed by the benefits that will accrue to farms and the wider community.

Working away in the background, with no extra effort on behalf of the farmer, it’s a “win-win” for farmers and their communities, as every litre of wastewater recycled is a litre of freshwater saved, he says.

The ClearTech system collects farm dairy effluent then treats it with a coagulant to bind effluent colloidal particles together in order to settle them out from the water. The treated water can then be recycled, with the leftover treated effluent being safely used to recycle nutrients back to the pasture without odour.

In addition to reducing freshwater used in the yard by about 50%, the system effectively increases effluent pond storage capacity, while at the same time reducing leaching losses of phosphate and E. coli from the treated effluent when it is applied to the land.

Hancox says as farmers the LDUF wants to do the right thing.

“So, ClearTech delivers us a system where we can make a real difference to our environmental impact without busting the budget and with no disruption to our normal farm operations.”

“We’re also focused on developing meaningful partnerships with like-minded organisations, and our close collaboration with Ravensdown has enabled the successful delivery of the ClearTech system to farmers,” says McKenzie.