Growing business in a lockdown 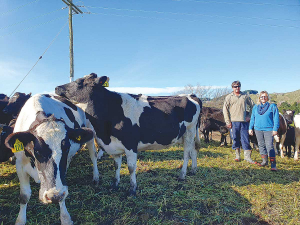 Rob and Shiralee Seerden walk among dry cows on a crop of winter oats.

The start of the new dairy season saw a Hawke’s Bay couple triple the number of cows under their care.

Rob and Shiralee Seerden 50/50 sharemilk 260 mainly Holstein Friesian cows at Tutira, north of Napier. In June, the award-winning couple expanded their business, taking on a nearby 600-cow contract milking position.

It is the second time in the past decade where the pair has jointly run two dairy farms at once. The 325ha block (280ha effective) is owned by the Poyntzfield Partnership and has a 50-bale rotary milking shed.

“It was a last-minute opportunity. We weren’t offered the job until May, which meant it was hard finding additional experienced staff,” said Shiralee.

The Seerdens employed two people who were already working on the farm.

It is 10 minutes up the road from the 165ha farm which Rob, Shiralee and their family have called home since June 2019.

The couple’s first season on the property could only be described as character-building. Animal health issues, and a lack of feed compounded by a prolonged drought, forced the herd to be dried off in late March.

“It was tough that’s for sure. We knew we’d face a few challenges in our first season on a new farm, but certainly not that many,” she said.

Within months of their arrival, the Seerdens were fighting to save cows with Theileriosis, a disease caused by a blood-borne parasite, primarily transmitted by ticks. It is widespread in half of the North Island.

“Our stock became infected when they were grazing on the same property as a mob of cattle from up north,” said Shiralee.

“Once they have it, it’s always in their system and comes out in times of stress. It causes anaemia and cows can go downhill quickly. A shortage of grass made it worse. We bought in molasses, a high energy feed, to try and keep as many animals alive as we could.”

They lost 15 cows. The farm produced almost 100,000kgMS in the 2019-20 season, which was 20,000kgMS behind the couple’s original target. However, the result still eclipsed the farm’s previous production record by 20,000kgMS.

The Seerdens worked hard to ensure they came into their second season on the farm well set-up and with plenty of feed.

About 150 tonnes of maize silage was contracted just as the drought started to tighten its grip on the region.

“The maize helped us get through the summer and autumn and we were still feeding it in the winter,” said Rob.

In mid-June, the herd had an average body condition score of 4.9, a month out from calving.

“We are really looking forward to having a good season,” he said.

“We have regrassed about 80 per cent of the milking platform with hybrid Italian ryegrasses and our average pasture cover is 2,400 kg/DM/ha.”

The herd started calving in mid-July. It is their first spring milking heifers born following an overhaul of mating practices.

But in 2017, when the Seerdens were nearing the end of a 10-year stint 50/50 sharemilking in Norsewood, they adopted a new approach and had their herd scored by approved aAa analyser Tracey Zimmerman. aAa is a dairy cattle breeding guide created in 1950 by a Vermont Holstein Friesian breeder.

Analysers study all the parts of each cow and determine the causes of functional problems, such as a narrow pelvis.

They then show breeders how to prevent the same problems from occurring in the next generation of animals.

“We looked into it after we got talking to another dairy farmer about it and thought it sounded like a good investment,” said Shiralee.

“Under our previous system, we were becoming frustrated with the quality of the feet and udders in our herd,” added Rob.

For the past three years the herd’s two-year-old heifers have all been inspected and scored by Tracey’s partner Jurjen Groenveld prior to mating.

They receive an individual lifetime score - a six-digit code - which is used to find a bull to correct the animal’s weaknesses.

It is not an easy task. Rob and Shiralee source bulls from five or six genetics companies, with the aim of producing a “strong cow with good longevity”.

The match-making operation is made even harder by the fact that the couple is trying to breed a fully A2A2 herd.

It means they can only use bulls with the A2A2 gene. A2 milk is sought-after for its health benefits. The herd was DNA profiled five years ago to identify animals producing milk free from the A1 protein. Three-quarters of the herd is now A2A2. Animals carrying the A1 gene are identified annually and sold.

“We rear 100 replacement heifers a year. They are all tested and profiled. We recently sold 30, mainly A1 heifers, for export,” said Rob.

“There’s no processor paying a premium or taking A2A2 milk in this part of the country. It’s unlikely there ever will be. We’re doing it because we’re 50/50 sharemilkers and our herd is our asset, so we want to do all we can to maximise its value.”

About 270 of the couple’s animals, including young stock, are registered Holstein Friesians.

Rob and Shiralee, who are members of Holstein Friesian NZ, are continually upskilling to make their business more robust and attractive in a competitive job market.

Rob is a trained artificial insemination technician with LIC, a seasonal position he has held for 22 years. Shiralee also delivers semen for the genetics company.

In 2017, the couple were named Hawke’s Bay/Wairarapa Share Farmers of the Year in the NZ Dairy Industry Awards.

Entering the prestigious competition pushed the Seerdens outside of their comfort zone, but the win has opened doors for them.

“Prior to entering the NZ Dairy Industry Awards, we frequently wouldn’t even get a response when we applied for a 50/50 sharemilking job,” said Shiralee.

“Winning the title changed everything for us. People started calling us back when we applied for positions and often didn’t even want to look at our CV. The turnaround was amazing.”

Encouragement pays off for dairy manager