Loving the results and the lifestyle 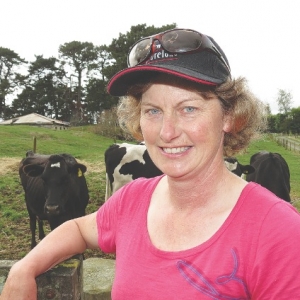 The field day was held at Christine Finnigan’s property where she milks 226 cows once a day. The objective of the day was to see how Finnigan was managing her property and hear about how she goes about this and also to hear from Colin Holmes, an OAD advocate.

Finnigan grew up on a dairy farm, graduated Bachelor of Agricultural Science and then worked as a sharemilker on farms including one with 2000 cows in 1990. But in 1995 she came back and took on the management of the family farm close to the small settlement of Glen Oroua. She also worked full- and part-time as a consulting officer with DairyNZ while bringing up her children.

This is her fourth year at OAD although before that she’d gone to OAD in autumn. She says this helped take the stress out of the operation, was kinder to the cows, preserved cow condition but still enabled her to achieve milk production targets. Finnigan’s move to OAD was partly, but not entirely, for the lifestyle.

“I also thought I had the herd to do it. One of the provisos of going OAD was that we retained profitability. The goal was to achieve twice a day production. We also aimed to improve our herd alongside that so that they are well suited for what we do. Another goal is to sell more surplus livestock than we do,” she says. She also points out that managing pasture for OAD is the same as TAD.

It could be said that Finnigan is a perfectionist. Certainly she has specific goals and a strong focus on achieving ‘best farm management practice’. She’s a strong believer in breeding worth (BW) and says this makes for long term sustainability – a key message from DairyNZ and LIC these days. She’ll be drying off her herd shortly with the focus on making sure that next season is a good one. “Doing the basics right works for me,” she says.

Having a small herd has advantages and disadvantages, she says. “I think there are a lot of things you can do with a small herd that you can’t do with a large herd. One of the advantages is you are able to pay greater attention to detail, but you don’t have economies of scale. As an aside some of the large herds don’t manage to capture either.

Finnigan employs a manager – for the past year former DairyNZ consulting officer Scott Ridsdale. He has resigned to go consulting and another manager will take his place.  Finnigan will maintain her supervisory role and says she’ll be on the farm at the key times.