Record them right in autumn rush 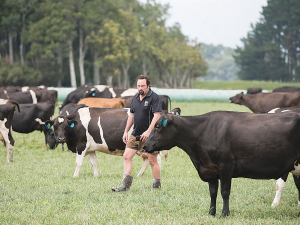 Sharemilkers are the minority among dairy and beef farmers, but in respect of NAIT they have a big role.

Manawatu 50/50 sharemilker Richard McIntyre manages a dairy and drystock block and he says whether buying or selling calves it is important to know who you are trading with and to ensure the movement is recorded and confirmed in NAIT to ensure effective livestock traceability.

“We definitely hold the key and set the benchmark for best practice traceability as we are obviously involved with animals from birth,” says McIntyre.

The Horowhenua farmer manages at least 1000 animals: 450 dairy and 600 beef stock on his main farm with a supporting drystock block under one NAIT location.

Sharemilkers generally move calves on a few days after birth, but McIntyre chooses to rear his for beef. He is preparing for about 150 calves this autumn.

“We have them for three months, then we tag and register them in NAIT at the point of sale. I like to scan them as they’re going on the truck and we complete an animal status declaration form (ASD) with every transaction.”

He tags calves himself to see it is done correctly because he knows from experience that it is not.

“It’s disappointing to see calves coming onfarm that aren’t tagged properly; this can create issues with tags falling out and undermines lifetime traceability. NAIT tags go in the right ear and in the central-inner part between the two veins; the female portion is always outward.”

McIntyre uses an RFID scanner to tag his animals.

“Every farmer should have a scanner. The newer wands are especially good: they connect directly to your smartphone and you can virtually scan all your animals and have them in NAIT before they go out the farm gate.”

Scanners also add value as an onfarm management tool for accurate weighing of calves and for reducing duplication, meaning less time spent in the office manually going through records.

Recording and confirming movements in NAIT is fundamental to the integrity of the NAIT online system and this should be done ideally within 48 hours of any animal transaction.

“I don’t believe animals going to the works are the biggest issue for NAIT.  It’s more private sales and bull movements that need attention.”

Stock agents too are responsible to provide the NAIT numbers at the time animals move off-farm.

Richard McIntyre believes education is the best way to get farmers NAIT-compliant.

“Most farmers want to do the right thing, and they might feel worried that they haven’t got all their records up to date. These same people have probably never committed a crime or missed a bill in their lives.

“But if farmers are deliberately avoiding NAIT and defying notices and warnings, I would support the introduction of heavy fines.”

For sharemilkers, McIntyre says they should “just stick to what works for you”.

“I advise getting a wand and don’t assume that recording movements in your herd management system will show up in NAIT; so if you’re recording or confirming movements make sure it is compatible with NAIT.”

He notes that NAIT helped during the Mycoplasma bovis response.

“Without it we would have been in a worse situation. It goes without saying that consumers nowadays want to know what they are eating and the story behind it and traceability is the key for doing that.

“In the future NAIT also can help showcase our products as uniquely New Zealand in overseas markets.”