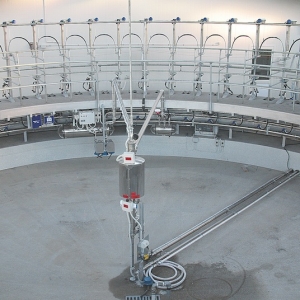 Last year after deciding he’d had enough with their existing milking system he converted to a Read milking system for their 46 bail rotary milking operation, it says.

Paul and his wife Sue have been milking at Ohaupo, near Cambridge, Waikato for the past thirty years. There they milk 650 Holstein cows on 148 hectares, with the help of their farm manager and three staff.

“We were using a system with electronic pulsators and they were becoming less reliable with age. We found they were also sensitive to moisture and foreign matter interfering with functionality,” says Bardoul.

“We’d known of Read Milking Systems for many years, and after a visit to their factory and to some farms to see it in action, we converted to Read’s a year ago.”

Most componentry was installed while the old system was still in place and functioning and then when this was completed we had a big day implementing the actual system change over.

“We’ve found it’s very low maintenance; it’s a simple system that’s achieving above industry standards. Our maintenance costs are slashed, we’re getting better milk out from quarters, lower SCC and milking is now quicker with all bales functioning – with the last system it wasn’t uncommon for 10% of bales to be non-operational. Even the cows seem happier with it.”

Bardoul describes Read Milking as “a family company with great values” and recommends it to other farmers.

Read Milking Systems are based in Rangiora, Canterbury and provide rotary and herringbone milking systems all over New Zealand and overseas.