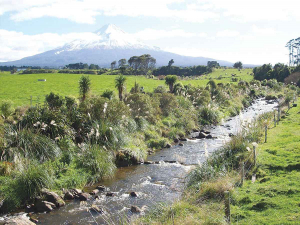 All existing Taranaki Regional Council riparian plan fencing can remain and will be accepted as compliant.

“We all want our waterways to be healthier – we share that goal with the Government,” says MacLeod.

“However, we had major concerns about the ability of the original proposals to deliver. We told Wellington their initial plans would have brought unpredictable and likely only marginal environmental benefits, but would have taken a very heavy toll on the social and economic well-being of this region and many others.”

“We’re still working though the details. But in general, this change of stance is to be welcomed. The council’s strong and evidence-based submissions were substantially agreed with and key changes made.”

Notably, the Government has delayed any decision on a key nutrient limits pending further analysis of their worth, rather than going ahead with strict limits that one study estimated would cost $100,000 each for up to a third of the region’s farms, threatening their viability.

It has also not proceeded with proposals to universally use OverseerFM in water regulations – the council strongly advised the OverseerFM model was not fit for that purpose.

The Government has also eased up on an initial proposal to impose a blanket 5m setback for all riparian fencing, saying now that 3m is the minimum.

Importantly for Taranaki, all existing council riparian plan fencing can remain and will be accepted as compliant, which the council strongly advocated for.

The Government has also backed off what would have been harsh constraints on dairying in the Waingongoro catchment, instead progressively targeting freshwater farm plans by which dairy farmers can implement farm-specific management to improve efficiency and reduce off-site effects.

Overall, MacLeod says it’s clear the Government has taken account of many of the points made in the council’s submission.

“If anything, the original proposals threatened to undo a lot of good work and goodwill and bring hardship and deprivation to communities engaged in productive and sustainable enterprise. We are still working through the amended proposals, but we’re encouraged that the voice of reason appears to have been heard, at least in part.

“We all know we have more to do in both our rural and urban areas, but Taranaki people know how to roll up our sleeves and keep moving forward – we’ve consistently led and shown New Zealand that it is not about endlessly changing plans, policies, meetings and paper – it’s on-the-ground actions that change and improve our environment.”