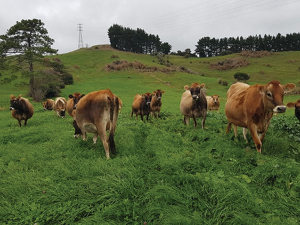 The new Jersey replacement heifers before they returned from grazing.

Calving is in full swing at an Auckland dairy farm owned by NZ Young Farmers (NZYF).

“We are well over halfway through calving,” said the chair of the Donald Pearson Farm board, Julie Pirie, in early August.

Forty-three in-calf Jersey heifers arrived on the farm in late May. They were bought from the estate of the late Bobbie Backhouse.

The heifers are in the top 5% for breeding worth (BW) and are said to be among New Zealand’s best Jersey genetics.

“Most of the heifers were in calf to an AB (artificial breeding) mating. Many have had heifers, which is excellent,” said Pirie.  “We already have more than 30 replacement heifer calves.”

The calves are being reared in an old wintering barn on the farm. It was converted into calf pens in June.

“Donald used to calve a couple of times a year, so his pens were perfectly adequate for his needs,” said Pirie.

“But we calve the entire herd in the spring, which means we needed more space to cope with the larger volume of calves.”

The herd produced 26,370 kgMS in the 2018-19 season. Production was hampered by a wet winter and a dry summer. This season is off to a promising start.

“Milk production is up 50% on the same time last season,” said Pirie.

“The new heifers are settling in well. The herd is being fed a blend of pellets with added minerals through the in-shed feed system.”

The farm’s manager Tom Ruki is using the covered stand-off pad to feed grass silage to the cows and protect pastures from damage.

“Tom’s using that facility well. The cows are in good condition and things are looking a lot better than they were at this time last year,” said Pirie.

“Our focus now is on getting as much milk in the vat as possible before the farm dries out in the summer.”

A major upgrade to the farm’s effluent system is complete -- a lined pond to handle effluent from the 11-aside herringbone milking shed. It’s connected to pods and a travelling irrigator will spread the effluent.

Graduates working at Fonterra have been assisting the Donald Pearson Farm board with long term planning for the farm.

Mentors can make a huge difference