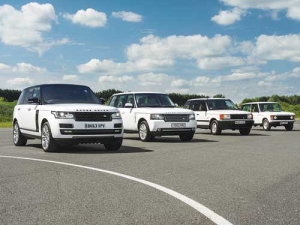 Back in 1970 we were wearing tank-tops, tie dies and platform shoes, and mirror must have been in short supply, but the year marked the birth of a motoring genre that has just reached its 45th birthday.

Back then the term SUV hadn’t been dreamed up, but today it forms a huge part of the new car market around the world.

1970 saw the birth of the Range Rover, which had rural folk thinking the motoring industry had gone mad. Who would want a huge box-like vehicle with permanent four wheel drive, big petrol guzzling engines and large leather seats? Surely it’ll never catch on?

But it did, spawning a generation of luxury four wheel drives that sat people higher, gave them a feeling of safety and took the curbs of suburbia in their stride.

In its 45 years the Range Rover has seen four evolutions, and history will record it achieving a number of firsts. So much so that the incarnation referred to as the Range Rover Classic was the first vehicle to be shown at the Louvre in Paris , with a citation that recognised “an exemplary work of industrial design”.
But the beauty wasn’t just skin deep. The RR was the first vehicle to complete the 18,000 mile Trans-American Expedition, won the London to Sydney Marathon in 1977, and the inaugural Paris Dakar Rally in 1979.

Today’s Range Rover is a far cry from the 1970s original; it has an all-aluminium body shell, can be specced with engines up to 550hp, and continues to push the technological boundaries with features like the recently launched All Terrain Progress Control (ATPC), which controls slow speed over difficult ground while the driver steers.

And after 45 years it still has the desirable name, still has the looks and still is the place to be if you want comfort and luxury.

A new entry-level Range Rover Velar is set to be the model Kiwi motorists can better afford.

Bringing a slice of Gotham to Grey Lynn and Greymouth

With the compact SUV sector making up 20% of the total SUV market, it’s not surprising to see Toyota launching a new model to claim its share.

Calling on history to make a modern point

When you tell your golfing buddies that you’ve just come back from the launch of the Range Rover Velar, they ask, “What sort of name is that?”