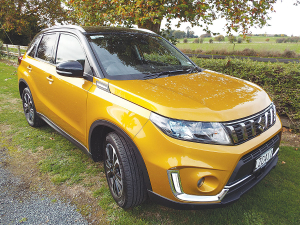 My daily drive is a seven-seat SUV so I’m always prepared for disappointment when reviewing a small SUV or crossover vehicle.

But I was unconcerned when Suzuki called about its Vitara 2WD turbo, the most popular small SUV sold in New Zealand.

The review vehicle was decked out in optional two-tone metallic paintwork — solar yellow with a black pearl roof.

The Vitara sits on 17-inch black alloys and, in the words of Madonna, it “strikes a pose”. Like any SUV it looks a little boxy but not so as to offend the eye.

The 2019 model gets a revised front grille with vertical spars, a re-sculpted rear skid plate and LED rear light clusters.

The Suzuki Booster jet technology gives a great feel to the way this little vehicle picks up its skirts, described nicely in the company’s marketing blurb as “feisty”.

With a wastegate, on the open road the Vitara can pick up its heels and equally around town it can potter along, in both cases consuming about 6L/100km.

Much of its ‘zip’ stems from it weighing only 1120kg -- only about 100kg more, say, than the Mazda MX5 sports car. But this lack of deadweight makes the Suzuki easy to point in the right direction and gives it poise even on gravel roads or poorly surfaced black top.

Travelling out west in rural Waikato, the Vitara gave a comfortable ride, unlike some of the portlier in its genre: no alarming body roll and it reacted well to sudden correction coming into tight bends too fast.

As in all SUVs, the Suzuki’s access is easy, and easily adjusted and supportive seats allow drivers to get into the right position.

The overall feel of the cabin is roomy despite the vehicle’s small size: it has a useful 375L storage in the rear, and 710L with the rear seats folded.

Living with the car day to day is made easier by its 7-inch colour touchscreen with audio, satnav, smartphone connectivity and a rear view reversing camera, plus plenty of stowage for the ephemera of everyday life.

Fit and finish is passable with the use of some soft-feel trimmings although in general the plastics used are perhaps a little harsh.

The Vitara does what is said on the ‘can’: function, straightforward controls and a decent level of comfort for a small vehicle, making it the ideal choice for a dash into town or a 200km jaunt on the weekend.

Safari on a Trek to NZ

Exclusive to the New Zealand market and available in limited supply, the Suzuki Jimny Safari adds to an already versatile and unique compact three-door model in the small four-wheel-drive vehicle sector.