You can’t get better bang out of your buck 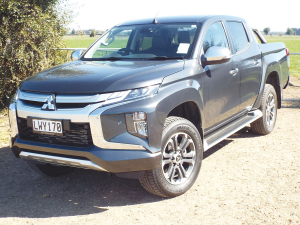 The Mitsubishi Triton has had a loyal following in NZ.

Always very capable, the Mitsubishi Triton has had a loyal following in New Zealand, even with its slightly off target looks.

The latest 2019 model takes things to a higher level, confirmed the buyers opening their wallets, resulting in the Mitsi rocketing up the ute league tables and giving Toyota a nudge downwards.

We take a closer look of the range topping VRX model.

First, notice the frontal aspect, much squared up compared to the old model and now looking more macho. And under the skin there’s an even wider range of changes and upgrades.

Up front, the tried and tested 4-cylinder 2.4L motor churns out an adequate 135kW and 437 Nm. But moving rearwards we see a few changes.

The transmission is now a 6-speed auto, replacing the previous 5-speeder, and it has Sports Mode selection. The drivetrain sees Mitsi’s Super Select 4WD system that allows the stand-out 4WD high selection on road at up to 100km/h,  ideal for HD high speed towing.

Transmission choices are 2H, 4H, 4HLC and 4LLC. The LC designation gives a locked centre differential that splits the drive 50:50 to the front and rear axles.

Also added is the new 4WD off road mode that uses a rotary dial to choose gravel, sand, mud/snow or rock, with the system configuring power, transmission and braking to best suit each scenario. And there’s hill descent control, forward collision mitigation and lane departure warning for all models.

For the range topping VRX Triton model we tested it’s worth noting the retail price of $49,900, making it a wise choice as its right up there with the best.

Here’s why. In that price, it comes standard with 18-inch alloys, side steps, a chrome sports bar, daytime running lights and an electrical mirror package. Add to that auto headlights, rain-sensing wipers, auto-dimming rear-view mirrors and a clever ultrasonic mis-acceleration function that stops inadvertent fender-benders.

The cabin, with leather-faced seats, exudes a level of class not indicated by the price, including lots of information from the clear dashboard and the full clout 7-inch touch screen in the centre console.

As you’d expect the console has a decent audio system, USB and HDMI ports, an excellent vehicle camera system and, of course, Apple Car Play and Android Auto connectivity.

On the road, engine noise is subdued, building up revs smoothly and working well with the six ratios of the auto box, whose changes are barely perceptible. Steering offers good feedback and the driver isn’t bombarded with too many warnings -- a problem with some other contenders.

As with many of its contemporaries, Triton’s lane departure function can be a little hit and miss and a bit too sensitive for rural roads.

The mass of buttons on the steering wheel can at first sight be overwhelming but you’d get over it in time.

At $49,900 the Triton VRX for 2019 is bang up to date and will undoubtably sell well, as it represents some of the best buying out there.

Mitsubishi has released details of its new Pajero Sport SUV scheduled to arrive here late in 2019.

Performance, safety upgrades and a new look for the 2019 Mitsubishi Triton have the manufacturer suggesting it expects its sales to increase by 25%.

The Mitsubishi Triton has obviously caught the eye of New Zealand’s ute buyers, as it sits in the top three in the sales league tables for this class of vehicle.

The latest Outlander from Mitsubishi has a softer, more conservative look than its predecessor.