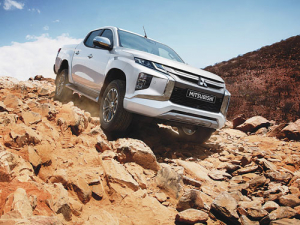 Performance, safety upgrades and a new look for the 2019 Mitsubishi Triton have the manufacturer suggesting it expects its sales to increase by 25%.

The new 1-tonne ute was recently unveiled at a global launch in Bangkok, Thailand, with first examples due to arrive in New Zealand in late December.

“The Triton is the fastest-growing mainstream 4WD ute in New Zealand and the third highest-selling, with a 12.2%* market share,” said Reece Congdon, MMNZ head of marketing and corporate affairs.

It is said to combine powerful styling with a robust profile, increased ground clearance and an enhanced 4WD system, which together deliver rugged good looks, greater rigidity and improved off-road performance. Machine-finished 18” alloys on GLX-R and VRX models add an extra touch of quality.

The Triton’s Super Select II 4WD system is available in top-of-the-range 4WD models and is now equipped with a new off-road mode including gravel, mud/snow, sand and rock settings. When engaged, off-road mode controls engine power, transmission and braking to regulate the amount of wheel slip and so maximise all-terrain performance.

The addition of hill descent control further assists in challenging situations, maintaining a constant vehicle speed during descents by regulating braking force to each wheel, allowing the driver to concentrate on steering.

The current range’s ladder-type frame and high impact-protection cabin structure is retained, backed by Mitsubishi’s latest active safety and driver assistance systems. These are new to the Triton, with forward collision mitigation and lane departure warning also available down the range on GLX and GLX-R models.

When the full range is announced in the coming weeks, Kiwis will be be offered a choice of four 2WD and ten 4WD models, in seven colours, four of them new offerings.

Mitsubishi has released details of its new Pajero Sport SUV scheduled to arrive here late in 2019.

You can’t get better bang out of your buck

Always very capable, the Mitsubishi Triton has had a loyal following in New Zealand, even with its slightly off target looks.

The Mitsubishi Triton has obviously caught the eye of New Zealand’s ute buyers, as it sits in the top three in the sales league tables for this class of vehicle.

The latest Outlander from Mitsubishi has a softer, more conservative look than its predecessor.