Are the days of industrial fertiliser numbered? 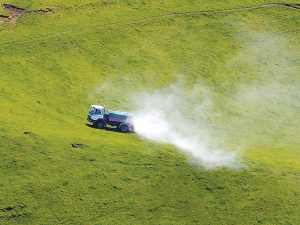 OPINION: We've been encouraged to grow our own for many years, now researchers at two Sydney universities have found a way of making 'green' ammonia and say their discovery could provide a major boost to farmers and speed up a global push to renewable hydrogen fuel.

Chemical engineers at the University of New South Wales and University of Sydney say their method of making ammonia (NH3) from air, water and renewable electricity removes the need for high temperatures, high pressure and large infrastructure, currently needed to commercially produce the gas.

The new production system, demonstrated in laboratory trials, could potentially provide a solution to the problem of storing and transporting hydrogen energy.

So, is the day of reckoning coming for the world's fertiliser manufacturers? Without doubt, ammonia synthesis was one of the major achievements of the 20th century as a source of nitrogen fertiliser, allowing farmers to quadruple the output of food crops to feed a burgeoning population. On the negative front, since the early 1900s, when it was first manufactured large-scale using the Haber-Bosch process, ammonia production has been very energy intensive. Additionally, this method also produces more carbon dioxide, than any other chemical making reaction.

Dr Emma Lovell, from UNSW's School of Chemical Engineering, says, "In fact, making ammonia consumes about 2% of the world's energy and makes 1% of its CO₂ while producing millions of tonnes of ammonia in centralised locations meant large amounts of energy were needed to transport it around the world."

Lovell and her colleagues have been looking at how to produce ammonia cheaply and on a smaller scale using renewable energy.

"The way that we did it does not rely on fossil fuel resources, nor emit CO₂," Lovell said. "Once the tehchnology is available commercially, it could be used to produce ammonia directly on site and on demand. Farmers could even do this on location to make fertiliser, removing the need for storage and transport."

Convert atmospheric nitrogen (N₂) directly to ammonia using electricity has posed a significant challenge for the last decade due to the inherent stability of N₂ that makes it difficult to dissolve and dissociate.

The research teams have conducted proof-of-concept lab experiments that used plasma (a form of lightning made in a tube) to convert air into an intermediary known among chemists as NOx - either NO₂ (nitrate) or NO₃ (nitrate).

The breakthrough of the new technology is said to be the design of the high-performance plasma reactors coupled with electrochemistry, offering the ability to generate the NOx intermediary at a significant rate and high energy efficiency.

Scientia Professor Rose Amal, who is co-director of ARC Training Centre for Global Hydrogen Economy, said the team’s “green” method of ammonia production could solve the problem of storage and transport of hydrogen energy.

“Hydrogen is very light, so you need a lot of space to store it, otherwise you have to compress or liquify it,” Professor Amal said. “But liquid ammonia actually stores more hydrogen than liquid hydrogen itself. And so there has been increasing interest in the use of ammonia as a potential energy vector for a carbon-free economy.”

Amal said ammonia could potentially be made in large quantities using the new green method ready for export.

“We can use electrons from solar farms to make ammonia and then export our sunshine as ammonia rather than hydrogen. When it arrives in countries like Japan and Germany, they can either split the ammonia and convert it back into hydrogen and nitrogen, or they can use it as a fuel.”

The team now wants to commercialise their breakthrough and is seeking to form a spin-off company to take its technology from laboratory-scale into the field, while industry supporters are forecasting that by 2050, ammonia could replace fossil fuels “in almost any application”.

Scientist Dr Bert Quin claims he has developed new fertiliser technology that will help minimise the environmental footprint on many farms.