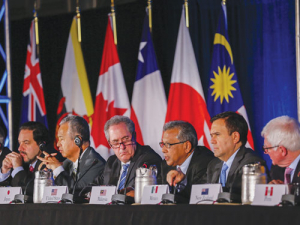 It's all happening on Capitol Hill. US lawmakers are bracing for a charm offensive from the White House.

President Obama is using the last days of his presidency to pass the Trans Pacific Partnership (TPP) agreement in Congress, a tough task given that most politicians on both sides of the aisle in Washington are against the deal.

There is talk of the White House tabling the TPP legislation during the ‘lame-duck session’, so lawmakers are bracing for calls from the White House.

Connecticut Democrat representative Rosa DeLauro told a news conference the White House would do “virtually anything they need to do to get the votes”.

‘We should anticipate more free rides on Air Force One, visits to the White House, special events in members’ districts to try to gain favor for the deal. The administration will be relentless.”

US dairy farmers are backing the deal: National Milk Producers Federation president Jim Mulhern says although TPP “achieves less than we wanted in terms of throwing open new markets in Japan and Canada, I am particularly pleased that we did not concede to a huge surge in new imports”.

So, why is President Obama struggling to garner support? It’s election season in the US and both Donald Trump and Hilary Clinton oppose TPP. Bernie Sanders is credited with having helped shift Clinton’s position during their primary battle. She had backed the deal while serving as President Obama’s Secretary of State.

The TPP is enormous: the 12 countries involved account for 36% of the global economy; the US is the world’s biggest economy and Japan is the third-biggest.

For New Zealand, tariffs on our exports to TPP countries would be eliminated, except for beef exports to Japan (where tariffs will fall markedly) and a number of dairy exports into the US, Japan, Mexico and Canada. On current trade volumes, this amounts to tariff savings of $259 million a year once TPP is fully implemented.

Prime Minister John Key recently warned the US: the region will not wait for you. Asian countries are determined to grow, with or without the US.

But his message to farmers and business leaders in Nebraska was clear: if TPP fails it will disadvantage both NZ and the US. It will mean others in Asia will set the rules for trade.

President Obama is facing one of the toughest tests of his presidency: an uphill battle to woo lawmakers and ensure the US doesn’t miss the TPP boat.

Failure in the US could spell the end of TPP and give birth to a new agreement that excludes the world’s largest economy.