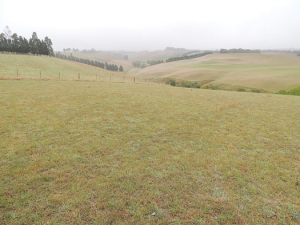 The dairy industry’s ongoing volatility coupled with a cold wet winter in many parts of the country has highlighted the real value of New Zealand’s pasture based system.

This has always been a hallmark of this country and our scientists and plant breeders have done a tremendous job developing new varieties of grass and management systems to get the maximum benefit from these.

But it could be argued that dairy farmers have been a bit complacent about their pastures as relatively comfortable payouts  have led farmers down the track of so-called supplements.

DairyNZ’s one-on-one assessment of how farmers are managing their pastures shows only 30% have got it right and the rest are off track or terribly off track.

While some farmers can look at a paddock and accurately estimate how much feed they have, many can’t.

The dairy industry after this downturn will be very different and the difference between profitable and unprofitable farming will come down to a series of small gains in cost saving and production. Hard data will make that difference as successful farmers have shown for years.

But the pack has to catch up with the leaders and take advantage of technology in all its forms. There will need to a strong focus on profitability and less on boasting about production. There may be fewer cows in the dairy industry but milk production may not drop. Look no further than the sheep industry which could frankly teach dairy farmers a thing or two about efficiency.

Professor Hamish Gow, Massey University, is right when he says the dairy industry has been living on borrowed time with its expectations and cost models. Saying goodbye to some of the euphoria around dairy will be good and hopefully a much stronger industry will emerge.

The best recent example is the kiwifruit industry. Vine-killing disease Psa was in some ways the best thing that happened to that sector because it got orchardists to look really hard at their businesses and be more hands-on and profit focused.

This downturn (not crisis) in the dairy may be a blessing in disguise.

The AB’s loss in Sydney was not a disaster, it was a motivation to do better and they did. That hopefully will win the World Cup.