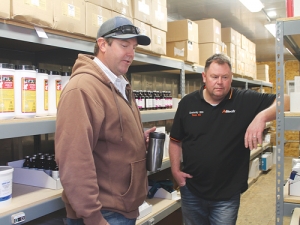 They are four years into a drought and fear they will run out of water to grow crops to feed their cows.

State government restrictions mean no more dairy ‘farms’ can be built in California and the dairymen believe the government no longer wants dairying in their state.

J.D. Ruan, who has a 5500 cow dairy in the Central Valley and interests in various farm businesses with up to 20,000 cows in the Central Valley alone, says it’s going to be tough in California for a long time. There are opportunities in other states, such as South Dakota, so he is looking there. But he will stick with his California operation because of the extent of his investment.

“The government won’t allow more expansion in California. In Dakota they are asking for more dairies – a totally different feeling than here in California where they don’t want us anymore.”

The milk price is based on a formula but there is definitely a correlation between Fonterra’s Global Dairy Trade and their milk prices, he says.

California’s daily dairy production is down about one million pounds on last year – that’s citing the co-op CDR, which Ruan supplies. That’s about 2.5% down on last year so far.

“Beef is good and the [dairymen] are not making any money. A lot of guys were happy to get a good milk price and as soon as they saw it heading back down they sold out. They just didn’t want to go through another downturn.”

But he says though California dairy farmers are very good at losing money, they are also good at making money when the milk price rises again and can regain all their losses.

Jessica Lawrence, Alltech territory sales rep in California, and also a dairy farmer through her family’s 2500 cow operation in the Central Valley, says water and government regulation are the biggest threats to dairying. Her family operation is spending $15,000-$20,000 per annum on water quality.

It is “do or die for dairy farming in California’s Central Valley at the moment, Lawrence says. “The government either needs to relax and let us dairy or there won’t be dairy.” The government wants housing, she says.

She explains that north of the Central Valley lies San Francisco, which does not understand dairy farming, and southwards is Los Angeles, which doesn’t understand either.

She says they are trying to figure out the science on water, but some of the science is disproving the environmentalists’ theories so they don’t want to know.

There is talk of water storage systems but it is 10 years too late. Some say to get out of the drought it would need to rain every day until the end of the year.  The snow melt also needs to get back into the lakes, but another California dairyman says that snow isn’t happening and they aren’t getting the snow melt.

There’s no more recycling they can do in dairy. “The only time we use freshwater is when it must be fresh – in water troughs and tank washing. Outside of that it’s all recycled.

Almost all the water in the dairies is now recycled; the only water not recycled is, for instance, cow drinking water.

“Some people say we will run out of water in a year, then others say we’ve got water for 30 years.” But it is not clear what is available in underground reserves.

It is supposed to hit $16.00/cwt by the end of the year, she understands. Milk price is based on real-time sales of whey powder, butter, cheese based on a formula.

The milk price is not directly related to global prices but it still relates to them. A lot of the whey sold in California is not accounted for in this price; some are arguing they should go back on the federal system. The Market Protection Plan – an insurance scheme which kicks in when milk prices drop below a certain level -  is not in effect in Central Valley as the plan is based on federal prices.

Lawrence sees California as the “star model of dairies”. A lot of people come to see their dairies, from the US and overseas. Within the US the dairy facilities will be comparable. The size might be different.

In 2009-2010 many dairies went out of business. The cow numbers in California did not change – the bigger guys got bigger. The ones that are still here added facilities or cow numbers. A few facilities went – older facilities that needed to go, she says.

When drought hits, the Californians don’t stop producing, Lawrence says.  The farmers speculate that if they all dumped their milk they would change the market in a day.

The problem is the banks lend money based on production and cow numbers. So if today you got a loan based on 2000 cows, then next day cut your herd to 1500 cows, the bank would pull your loan to give you a smaller loan. Hence the controversy: when the milk price drops, the farmers need bigger loans, but the banks say ‘if you want bigger loans, you need more cows’.

“California is the biggest milk producer in the US but it does not have the most cows. We produce more milk per cow.”

Government threats to viability are increasing the regulation of water and air quality; the subject of methane gas has caused a lot of talk of a tax. Air quality also includes dust control. Air quality is a lot easier to deal with than water quality, says Lawrence.

She would rather see her water quality inspector once a week than once a year. She has to test her lagoon water for irrigating, measure the amount of water they are using, test well water to see if they are leaching into the water supply, and test crops at harvest and soil samples. “They say ‘water quality’ but it incorporates a lot of different management practices.”

You might say that lime runs deep in Greer Manderson's bones.