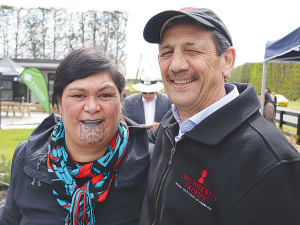 The Trust is one of three finalists in this year’s Ahuwhenua Trophy competition for the top Māori horticulturalist of the year. It is the first time in the award’s 87-year history that horticulture has been included in the competition.

In the past, the competition has been for dairy and sheep and beef, held in alternate years. However, this year the competition was widened to include horticulture. The field day attracted a wide range of people from the kiwifruit industry – as well as the wider agri business sector. The day commenced with a Powhiri at the picturesque Hungahungatoroa Marae, which overlooks Tauranga Harbour. This was followed by a series of presentations from trustees and staff about its history, governance, strategy and business planning.

Those attending the field day were also taken on a tour of the property. One of the special guests at the field day was the Minister of Māori Development, Nanaia Mahuta. She said the competition helps raise the bar for Māori in terms of horticulture and enables landowners to demonstrate the importance of legacy, partnerships and relationships, and holding on to their whenua (land). Mahuta says that post-Covid 19, Māori producers are going to make a significant contribution to the future of New Zealand.

Ahuwhenua Trophy Management Committee chair Kingi Smiler says it was a special and historic day for Māori to have their efforts in the horticultural sector recognised. He says Māori are major contributors to the wealth generated by the sector.

It is estimated that Māori own more than 10% of the kiwifruit plantings in NZ and this is increasing. Smiler praised Ngai Tukairangi for its organisation of the field day and says they have set a benchmark for others who enter this competition in the future. He says field days are a great way of showcasing the achievements of growers and farmers and people can see at first-hand how an operation works.

The other two finalists in the competition are Hineora Orchard, Te Kaha 15B Ahu Whenua Trust. This is a Māori freehold land block located in the Eastern Bay of Plenty township of Te Kaha, 65km east of Opotiki on which the Trust run a kiwifruit joint venture operation. The other finalist is Otama Marere (Paengaroa North A5) Block in Paengaroa near the Bay of Plenty town of Te Puke.

It grows a mixture of Green, SunGold and organic kiwifruit – as well as avocados.

Smiler says all three finalists are exemplars of excellence and says they do the competition proud. The winner of the Ahuwhenua Trophy for Horticulture will be announced at a function in Rotorua on Friday November 20.