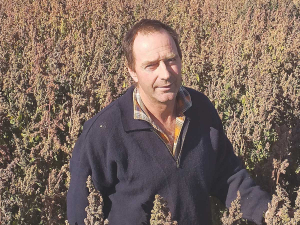 Andrew Currie, who farms near Methven in inland Canterbury, believes he is one of only three commercial quinoa growers in the country. He’s the only one in the South Island and the only one with a breeding programme of golden, white, red and black quinoa varieties.

He told Rural News if there is any good to come out of the current COVID-19 emergency, it may be renewed support for locally grown produce. Currie says the post-lockdown environment will be very different.

“New Zealand farming will be the strength of our economy. Some people will need to change occupation to more rural orientated jobs.”

Currie says it would be “perfect” if the growers could combine their efforts and share the costs of a “buy local” campaign, producing quinoa that is fully traceable to the grower and paddock that produced it.

Currie farms 300ha, much of it land first leased by his grandfather in the 1940s. Most of his operation is devoted to conventional cereal crops like wheat, barley and grass seed. However, a penchant for the unconventional sees him devote a significant portion each year to the likes of quinoa, Hungarian millet, sunflower, and canary seed.

Sometimes referred to as a pseudo-cereal, quinoa is more closely related to beets and spinach than to grasses. Cultivated for centuries in the Andes, it has become popular worldwide as a gluten-free ‘superfood’ and grain alternative.

Currie sells his quinoa direct from his website and through whole-food shops throughout the South Island and Wellington, under the Canterbury Quinoa brand.

He sells both whole seed and a flaked quinoa similar to rolled oats which can be used as a gluten-free alternative to flour. It can thicken soup or stews, and in baking gives a binding effect to avoid the crumbly or grainy texture common in gluten-free baked goods.

Currie says sales have risen in the past 12 months “from kilos per week to sacks per week”. However, he concedes that marketing remained a challenge because it is hard to know how big the market is.

MPI can’t say how much is imported, he says.

Currie says it took a very long time to get food safety accreditation, at a high cost – so he’s shied away from selling through supermarkets because of the low margins. But he notes that Countdown is marketing itself as supporting local sources, particularly of grain.

“Even though quinoa’s not a grain, that’s got to be great for the New Zealand arable industry,” he told Rural News.

“I wonder if after this COVID-19 has gone through, whether we get a boost to buy local. We won’t be going on holiday overseas either.”

Currie’s advice to any farmers contemplating taking up niche crops is to just give it a go.

“Sometimes you fail very well. Failing is not necessarily bad because you learn from those mistakes.

“With the quinoa we sometimes have to re-sow fields.

“It can be challenging to get it established early enough because it is a very long growing-season crop.”

But once established it is easy to grow, he says.