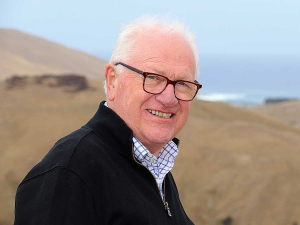 Tim Ritchie, who has just retired as Meat Industry Association chief executive – a position he held for the last 11 years. He says Britain joining the EU forced NZ to look at the world as its marketplace and not just rely on what was essentially a single market. It also forced us to move away from primarily sending frozen lamb carcasses to the UK.

Richie told Rural News this meant the NZ meat industry had to move from being a commodity supplier of meat to producing specialty packaged cuts, which could be sent to new, high-end markets.

Ritchie has been one of the people responsible for leading and overseeing the industry’s change for more than four decades. He was doing this right up to his last day at work – with a significant role in determining how meat processing plants will operate in a Covid-19 environment.

After completing a Bachelor of Agricultural Science degree in marketing and economics at Lincoln, Ritchie spent four years with Treasury before joining the then Freezing Companies Association and the NZ Meat Exporters Council – now MIA.

He was there four years before embarking on a career which saw him working for Towers International and then a move to Waitaki International, both in NZ and overseas. Working for Waitaki in London Ritchie describes as the highlight of his career

“There as a 30 something year-old my job was to manage the Waitaki operation in the UK and Europe,” he told Rural News. “That’s when the butchers’ shops were disappearing – or their importance was reducing, and the supermarkets were coming on the scene.”

He says that traditionally butcher shops in the UK had bought whole frozen lamb carcasses from meat importing companies – such as Borthwicks.

“Back at their shops, the meat would be thawed out and the butcher would cut off a bit of meat for the customers while they were watching.”

Ritchie says the carcass trade was the business model of Borthwicks and this quickly disappeared with the advent of supermarkets such as Waitrose and Tesco. They wanted well-cut portions of meat neatly vacuum packaged and presented ready for sale on their shelves.

At Waitaki, he developed close relationships with the supermarkets and meeting their demand triggered a whole new way in which NZ meat was to be processed from then on to the present day. Back home, further processing became the catch cry and meat industry invested close to $400 million dollars to upgrade plants to meet EU standards and install meat processing facilities to enable specialty cuts to the specifications of the supermarket chains. The days of a lamb carcass wrapped in a sock net bag and shipped to the UK was at an end.

“It was an exciting time because we were transitioning from an old to a new business model,” he says.

Britain’s entry to the EU also stimulated this change and while NZ fought long and hard  and is still doing so to retain fair access for sheepmeat to the UK and the EU, the message was clear, Ritchie says, for NZ to look all over the world for markets.

“We used to be focusing on finding a market for our products,” he adds. “Now we are almost at the stage of rationing products to markets. Sending different cuts to countries, which will pay a premium for these.”

Ritchie says the other major achievement during his time in the meat industry is the way that NZ set new and high professional standards around halal slaughter. He says this has been extraordinarily important in us in securing new markets, including China which has a Muslim population of about 23 million.

Tim Ritchie has had an amazing career – working in senior roles for the meat industry in London and Brussels – as well as NZ. He has travelled extensively on trade missions to open up new markets for NZ meat.

Ritchie says the MIA has carved out an important role for itself and works closely with government agencies – such as MPI and MFAT – in gaining and retaining market access.

“It’s broadened out and matured,” he says.

Ritchie – along with wife Deb –a have farming interests in the Wairarapa and he plans, among other things, to write a book about White Rock Station where he is a part owner.

He also has overseas travel plans at some stage in the future. However, also expect to see Tim Ritchie continue to be involved, in some way, in the primary sector.